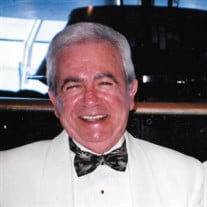 Born into the “Wild West” era of communication, Angel’s early life was colored by telegraphed messages circling the world, switchboard operators connecting calls and his beloved family listening to the rich, crackling sounds of Duke Ellington, Glen Miller and the famous Mercury Radio Theater. Inspired by the Golden Age of Radio, he would climb attic stairs and spend hours experimenting with his radio receiving station, “…capable of receiving almost every radio station in the world!” As those frequencies traveled far and wide, and the sounds of WWII traveled back to him, he wrote at length of his intention to create a career in radio and television; and as he dreamed his life, he would eventually live his dream. After graduating from Jefferson High School, where he was affectionately known as heartthrob “John Gar the Movie Star, “ (he always had charisma) he studied radio at Rochester Institute of Technology. Drafted into the Korean War as a specialist, he taught radio communication to the troops. Later, when recounting his military experience, he often spoke with great reverence regarding the brave men who never returned home and humbly maintained that his contribution was far less important than theirs. Civilian life carried him back to Rochester, and the love of his life, Marge (Michilina), where he supported his young family by working on Cobb’s Hill as a police radio dispatcher by night, while fixing televisions by day. Always on the move, he became an executive for Motorola and then a partner in Flower City Communications, eventually serving as president. He and his partner created Flower City Paging and then Tele-Page Communications, eventually acquired by AT&T. They served as consultants for the 80’s TV series Miami Vice and supplied those infamous “brick” phones carried by Don Johnson. They owned some of the first radio towers ever built, in cities including Los Angeles, Miami and NYC, and held the national marine license for ship to shore communication. They also founded GAR Properties, a commercial real estate venture that contributed to the Rochester community by donating buildings to The Adam Walsh Foundation, and RIT. Angel loved gadgets, Mario Lanza on a Sunday morning, traveling the world with his love, sailing the waves of Lake Ontario, his wife’s famous Italian cookies and anything chocolate. And while his exuberant, entrepreneurial spirit led his life down amazing paths of success, we believe his greatest achievement was that of a kind, generous, funny human being whose quick, engaging smile endeared him to everyone he met. Rest in Peace, dear Angel; you’ve ascended to a much higher frequency. We will always remember the sparkle in your eyes, your crazy sense of humor, the lessons you taught and the dreams you inspired. You lived with adventure in your soul and love in your heart, and you will live in our hearts forever.

The family of Angel "John" Sebastian Grande created this Life Tributes page to make it easy to share your memories.

Born into the “Wild West” era of communication, Angel’s early...