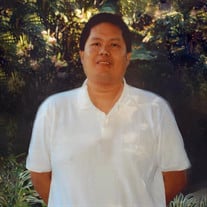 Barry Frank Hom passed away unexpectedly during the night of Sunday, May 8 / Monday, May 9 in Fort Myers, Florida at the age of 50 years. He was born in New York City on February 24, 1972, graduated from Fort Myers High School, Class of 1990, and from the University of Florida in December 1994 with a Bachelor of Arts in English. He worked 20 years (!) at Alorica, a customer experience call center in Fort Myers. Barry loved riding roller coasters. We found a certificate commemorating his 100th coaster and pictures of him on different rides. He travelled not just the US, but the world to ride--Six Flags, Georgia; Cedar Point, Ohio; in the 2000s, he had even travelled to Japan. Barry loved the Orlando theme parks--Sea World, Universal Studios, and especially the Disney parks. He held annual passes and passports for as long as we can remember, and it wasn't unusual for him to spend a long weekend at all of them. And he'd even gifted a few annual passes for his niece and nephew when they were young. Barry loved Halloween, especially at the theme parks. Halloween Horror Nights and Howl-O-Sceam--it seemed like he went every year. Barry loved Star Wars (he'd just told us on FB, "May the 4th be with you), Star Trek (he'd sent family and friends postcards commemorating April 5, the day of first contact between Vulcans and humans), and vintage video games (there are Atari 2600, Atari 5200, Sega Genesis, and Playstation 2 systems and games among his effects). Barry collected movies and music. The VHS, DVDs, CDs, and cassettes point to an eclectic taste in nearly every genre. He collected comic books, their titles reflecting the same eclecticism. Barry loved live performance. He just saw in March Blue Man Group at the Barbara B. Mann Performing Arts Hall in Fort Myers, and was a regular as traveling productions performed in Fort Myers. Barry loved rabbits. One of his last Facebook posts this past Sunday wished us a happy bunday (he'd periodically wish us a happy caterday, too). When Bobby lived with him in college, he had a rabbit as a pet. Barry loved sending cards. We could expect every holiday--major and minor--a greeting card. At New Years, Bobby’s family would go through our joy jar--literally a jar of ephemera from the year to remind us of the joy we had experienced--and every other item we'd pull out was a card from Uncle Barry. Barry had friends. I found letters and cards and well wishes with addresses across the US (Hawaii, Idaho, California, Massachusetts) and British Columbia. His Facebook already has condolences and memories from co-workers, past and present. He is survived by his parents, Len Or Hom and Wai Sheung Fong Hom, his older brothers, Ben and Bobby, a sister-in-law, nephew, niece, and many, many friends. While gone in body, he remains in our memories.

Barry Frank Hom passed away unexpectedly during the night of Sunday, May 8 / Monday, May 9 in Fort Myers, Florida at the age of 50 years. He was born in New York City on February 24, 1972, graduated from Fort Myers High School, Class of 1990,... View Obituary & Service Information

The family of Barry Frank Hom created this Life Tributes page to make it easy to share your memories.

Barry Frank Hom passed away unexpectedly during the night of...

Send flowers to the Hom family.