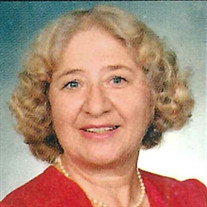 Betty Araxie Stevens, 93, a resident of Lee County since 1973, passed away peacefully surrounded by family into the next life on Thursday, September 9, 2021. She was born on November 23, 1927, in Plovdiv, Bulgaria to parents who had been on opposite sides in the First World War (a Serbian mother and Bulgarian father). Following a devastating earthquake in 1928, the family moved to Paris, France, which became the dominant culture of her formative years. There, her family lived under Nazi occupation during WWII. For several years during those dark times, Betty and her older sister Danielle, were sent for safety to a convent school in the countryside. Betty later spoke with excitement about the liberation of Paris in 1945 As a young girl, Betty admired all the culture that was going on in the United States, a huge fan of Disney and the famous movies, Betty wanted to make a life with new opportunities in the United States. She sailed from France on board the Ile De France and immigrated thru Ellis Island in 1950, at the age of 22. Betty moved to Washington D.C and went on to earn a Bachelor of Arts degree in psychology at George Washington University in June 1957. After graduation, she met the love of her life, Douglas Stevens, Sr., and they married on March 29, 1959. They had 2 boys, lived in the metropolitan area of D.C., and in 1973, she and her family relocated to Fort Myers, Florida. Betty loved to cook, bake, and entertain with friends and family. She enjoyed the arts, movies, Broadway productions, dancing, volunteering to many organizations (including the Optimist club and French club), tutoring French at the local schools, enjoyed the holidays, and the beaches of SW Florida. After her husband died in 1986, Betty finally learned to drive a car and went on to get her Real Estate license, working until she turned 75. Betty’s greatest joy now was spending time with grandchildren and watching all their activities in sports, music, and school events. Betty was their biggest fan. Betty was an honest, genuine women, always giving, who loved people, lived life to the fullest and always made people laugh. She had the biggest smile in the world. Betty was preceded in death by her parents, Parnac and Jivka Krikorian, her husband, Douglas Stevens, Sr., and her sister, Danielle Gantz. She is survived by her two loving sons, Douglas Stevens Jr. (Cortney) of Fort Myers, FL, Mark G. Stevens of Fort Myers, FL, four grandchildren, twins Tyler and Brandon Stevens, Justin and Rachel Stevens, and many nieces and nephews who all adored her. A visitation will be held from 12:30 – 1:00 PM, Saturday, September 25, 2021 at Fort Myers Memorial Gardens Funeral Home, 1589 Colonial Blvd., Fort Myers, FL. A Funeral Service will be celebrated 1:00 PM, Saturday, September 25, 2021 at the funeral home. Interment will follow. at Memorial Gardens Cemetery. For those who can not join in person, you can join through live stream by clicking the link below. https://www.econdolence.com/join-viewneral?jc=10000:w4Tm6qwMX9P1b79xG7JJibCMZXZnH0Lt:lgCFJKOOt6qE0BXB2adMaA==:KZCZ8b90GlTPd64vCdxlLg==

Betty Araxie Stevens, 93, a resident of Lee County since 1973, passed away peacefully surrounded by family into the next life on Thursday, September 9, 2021. She was born on November 23, 1927, in Plovdiv, Bulgaria to parents who had been on... View Obituary & Service Information

The family of Betty Araxie Stevens created this Life Tributes page to make it easy to share your memories.