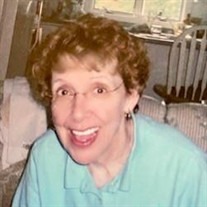 Beverly Ann (Valade) Negip, 79, of Thompson CT and most recently Fort Myers FL, passed away peacefully on March 30, 2021 in Fort Myers, FL. Mrs. Negip graduated from Tourtellotte Memorial High School (1959). At Tourtellotte ‘Bev’ played basketball all four years. She captained the basketball team her senior year and was also voted best athlete along with her future husband Ed. Bev’s senior yearbook quote foretold what was to come “She’s witty, she’s wise and a good sport too, Anything in math she’s able to do.” She received a Bachelor of Science degree at Central Connecticut State University (1963) and Master of Science degree from Eastern Connecticut State College (1973). Mrs. Negip’s field of study was, yes, mathematics. She fulfilled her destiny as a teacher for her entire adult life. Most of her career Mrs. Negip taught high school mathematics at her high school alma matter in Thompson, Ct. Even in retirement she could not put down her passion for teaching and spent several years as a math tutor at the Rectory School in Pomfret, CT. If you knew Bev, you know that when she wasn’t teaching, she was probably talking on the phone. Bev loved to visit and talk with her close circle of friends and remained close with many former students. But the time spent with her family and grandchildren was what ‘Grammy’ most treasured. Born in Webster, MA, Beverly was the daughter of the late Joseph and Sylvia (Hicks) Valade. She was the loving wife of the late Edward Negip; mother of the late Judith (Negip) LeVine (1969-2006) and the sister of the late Joseph Valade. Beverly is survived by her son, David Negip and his wife Kate of Fort Myers, FL; son-in-law, Charles LeVine, Jr. of Windham, NH; brother, Charles Valade of Sutton, MA; sister, Marie (Valade) Czechowski of Webster, MA, several nieces and nephews; and four grandchildren, Charles, Katherine, Nathan and Madeline. Plans for a service have not been finalized but the family is coordinating and looking at potential future dates to hold services for family and friends in Connecticut. Burial will be in St. Joseph’s Cemetery, North Grosvenordale, CT. Memorial Donations may be made, in lieu of flowers, to the National Multiple Sclerosis Society of America – www.nationalmssociety.org.

The family of Beverly Ann Valade Negip created this Life Tributes page to make it easy to share your memories.

Beverly Ann (Valade) Negip, 79, of Thompson CT and most recently...

Send flowers to the Negip family.