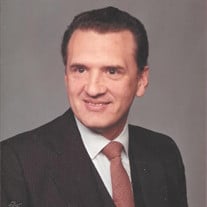 Carl A. Grispino was called home by Our Lord on April 6, 2021 in Fort Myers, Florida. Carl was the son of Charles Grispino and Vita Lombardo Grispino, both deceased, as well as his brother, Richard. Carl was born in Brooklyn, New York where he graduated from Bushwick High School. He graduated from Seton Hall University with a degree in classical languages and graduated from the University of San Francisco in California with a Masters Degree in Guidance and Counseling. Carl was ordained a priest in 1965 and was a member of the Pontifical Institute for Foreign Missions and ministered in the diocese of Santa Rosa in California and then in the Eparchy (Eastern Greek Rite) of Parma, Ohio. He leaves behind the love of his life, his wife, Linda Messing Grispino and other members of his loving family, his brother-in-law and sister-in-law, Dr. Jeffrey Messing and wife, Janet Messing; his niece, Laura Messing Simons; his nephew, Scott Messing and great nieces, Allison Simons Graziani and Nicolette Simons. Carl loved being an educator. He was a faculty member of Byzantine High School in Parma, Ohio and an adjunct professor in the counselor education program at St. John’s College of Cleveland. The Berea City Schools is where he spent the greatest and most fulfilling part of his career as a counselor and department chair at Berea High School. When he moved to Florida, he began teaching Italian classes and Regional Italian Cooking at Big Arts on Sanibel Island. He also volunteered as a chef at the Soup Kitchen in Fort Myers. Mass of Christian Burial will be Celebrated at 11:00 AM Friday, April 16, 2021 at St. John XXIII Catholic Church, 13060 Palomino Lane, Fort Myers, FL 33912. Friends will be received from 10:30 AM until the time of the Mass. Following the Mass, private burial will take place in Fort Myers Memorial Gardens Cemetery. In lieu of flowers, donations may be made in his name to Harry Chapin Food Bank in Fort Myers (www.harrychapinfoodbank.org).

Carl A. Grispino was called home by Our Lord on April 6, 2021 in Fort Myers, Florida. Carl was the son of Charles Grispino and Vita Lombardo Grispino, both deceased, as well as his brother, Richard. Carl was born in Brooklyn, New York where... View Obituary & Service Information

The family of Carl A. Grispino created this Life Tributes page to make it easy to share your memories.

Send flowers to the Grispino family.