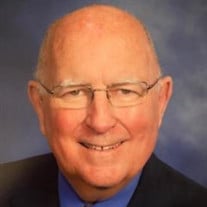 Claude I. Allen, Jr., 85, passed away peacefully at Lake Park Nursing and Rehabilitation in Indian Trail, North Carolina on Wednesday, December 9, 2020. The youngest of three children, he was born on April 27, 1935 in Lake Wales, Florida to Claude I. Allen, Sr. and Margaret J. Allen. Claude grew up in Gainesville, Florida and attended Gainesville High School. He became an avid Gator fan and graduated from the University of Florida in 1958 with a Bachelor of Arts Degree. While at the University of Florida, Claude became a brother in the Sigma Chi Fraternity, was the drum major for the Fighting Gator Marching Band, served on the University’s Honor Court, was active in the ROTC, and was initiated into Florida Blue Key. He then attended Columbia Theological Seminary in Decatur, Georgia and graduated in 1961 with a Master of Theology. He served as Chaplain (Captain) in the Army Reserves from 1962 - 1972. Claude served as Associate Pastor at Granada Presbyterian Church in Coral Gables, Florida from 1961-1963, Senior Pastor at Friendship Presbyterian Church in Athens, Georgia from 1963 -1967, and Senior Pastor at Midway Presbyterian Church in Decatur, Georgia from 1967 - 1969. In 1962, he married Alice P. Crowe. They moved to Fort Myers in 1969 when he became the Senior Pastor of Covenant Presbyterian Church. After leaving the ministry, he became a trusted real estate broker and opened Claude Allen Realty. Claude enjoyed a tremendous 40-year career in real estate, receiving numerous awards for outstanding residential sales and service in the Fort Myers area. After retiring from real estate, Claude spent five years living in Islamorada, Florida with family. During this time he continued to share his infectious spirit by officiating over 100 weddings and serving as the chaplain at the Boys Scouts of America National High Adventure Sea Camp. Claude lived an amazing life full of love and family. He was known for his charitable ways, never turning down an opportunity to mentor and counsel those in need. He was a friend to all. Going out to eat with Claude in Fort Myers, you felt like you were dining with a celebrity, with a line of his buddies coming over to shake his hand and wish him well. There was something about his smile and infectious laugh that made you feel at ease. He is truly going to be missed. He was one of a kind. Claude was predeceased by his wife of 43 years: Alice. He is survived by his three daughters: Almeda A. Bahlke and her husband, Bill, Shirley A. Wilson and her husband, Ted and Alice A. Pamplin and her husband, Bo. He is also survived by six grandchildren: Andrew Pamplin, William Pamplin, Alice Wilson, Amber Bahlke, Kris Bahlke, his wife, Kelly, and Alice Bahlke; and three great-grandchildren, Kimber, Ryan, and Anderson. In addition, he is survived by his sister, Eleanor A. Samuels, of Gainesville, Florida. His sister, Shirley A. Dell, predeceased him. A special thank you to the amazing staff at Lake Park Nursing and Rehabilitation who loved Claude like he was part of their own family. A private memorial service will be held at Fort Myers Memorial Gardens Cemetery, 1589 Colonial Blvd., followed by a socially distanced, drive-through reception at the same location from 11:30 AM – 12:00 PM. In lieu of flowers, memorial gifts may be made to the Claude and Alice Allen Memorial Scholarship Fund, c/o Covenant Presbyterian Church, 2439 McGregor Blvd., Fort Myers, Florida 33901.

Claude I. Allen, Jr., 85, passed away peacefully at Lake Park Nursing and Rehabilitation in Indian Trail, North Carolina on Wednesday, December 9, 2020. The youngest of three children, he was born on April 27, 1935 in Lake Wales, Florida to... View Obituary & Service Information

The family of Claude I Allen Jr created this Life Tributes page to make it easy to share your memories.

Send flowers to the Allen family.