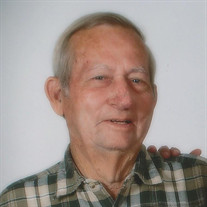 Curtis Robert Brown, 82 a resident of Colquitt, GA and formerly of Fort Myers, FL died Tuesday, February 15, 2022 at his former residence in Fort Myers with his daughter by his side. Curtis was born to Daisy and Hobson Brown on December 29, 1939 in Fort Myers, FL. He was the first of four children. Curtis graduated from Fort Myers High in 1958. Curtis didn’t live the average life ~ He lived an adventurously full life with a unique sense of humor. He would do anything for a laugh and enjoyed a good dare. His wit was razor sharp – he lived by the motto either find a way or make one. No matter where he was going; he was always in the fast lane. Curtis was an avid water skier in his younger years. He was even featured in the Caloosa Water Ski – dare-devil exhibitions on the Caloosahatchee near the Edison Bridge in the October of 1958; along with some water skiing stunts at Cypress Gardens. Curtis volunteered for service in the United States Army when he was 19 years old and then transfer to the National Guard for 5 more years of service in Florida. He started working in carpentry as his passion for fast horses and dogs grew. He became an owner / trainer of horses at the Quarter horse racetracks in Florida. This is how he meet his wife Janis at Gator Downs. Curtis and Janis were married in August of 1971. Later in 1975 they had their only daughter Terri. Curtis had a passion for hunting starting at a very early age. Curtis started hunting with his dad and he never stopped. Curtis loved to hear the dogs “speak”. These hunting dogs could communicate whether it was a whine, howl, bark or bay. Curtis and his hunting buddies knew these unique sounds and would follow the hounds. Curtis would walk through the swamps of South Florida with a pair of tennis shoes on as the hunting dogs took the lead. He was known by many as “Horse Fly”.Curtis retired from Lee County in 2005 and moved to Colquitt, GA. Curtis is survived by his daughter, Terri Brown (Jones), a granddaughter, Aspen of Fort Myers, FL along with 2 sisters, Jo Simmons and Joan Carter of Donalsonville, GA; nieces, Kim Miller (Donalsonville, GA), Tracy Henley (Cape Coral, FL) and Ashley Harrison (Florida); nephews, Daryl Simmons (Donalsonville, GA), Joe Carter (S Carolina), Brett Paschal (Ft Myers, FL), Chad and Jason Albert (Jacksonville, FL). Curtis was preceded in death by his wife, Janis A Brown of 31 years, his parents, Hobson and Daisy Brown and his sister, Sandra Paschal. A Memorial Service and reception will be held for all friends and family to attend at the Brown residence -6791 Pangola Rd Ft. Myers, FL 33905 on Saturday, March 19, 2022 at 4pm.

Curtis Robert Brown, 82 a resident of Colquitt, GA and formerly of Fort Myers, FL died Tuesday, February 15, 2022 at his former residence in Fort Myers with his daughter by his side. Curtis was born to Daisy and Hobson Brown on December 29,... View Obituary & Service Information

The family of Curtis R. Brown created this Life Tributes page to make it easy to share your memories.

Curtis Robert Brown, 82 a resident of Colquitt, GA and formerly...

Send flowers to the Brown family.