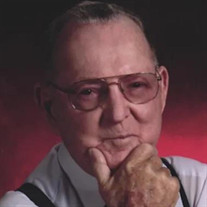 Daniel R. Harper, (Chief) beloved husband and father, went to be with his Lord and Savior Jesus Christ on Wednesday, April 20. At the time of his passing, he was at home surrounded by his family. He was a man known for his intelligence, calm demeanor under any circumstances and leadership in both business and giving to the community. He was a local highway/heavy construction and mining trailblazer in Southwest Florida. Harper was very involved in the construction and development of many well-known parts of Lee County as President and an owner of Harper Bros., Inc., the largest highway, earthmoving and mining company in Southwest Florida from the mid 1950's until its sale in 1999. You cannot drive in any part of Lee County without travelling over a roadway built by Harper Bros. Many of the well-established subdivisions in the area were also constructed by the company under Mr. Harper's leadership, along with his partner of 60 years, Quinton McNew. Roadways such as I-75, Colonial Blvd., Summerlin Road, McGregor Blvd., Winkler Avenue, Radio Road, David Blvd., US 41, and Ben C. Pratt/Six Mile Cypress Parkway were built by the company. Daniel was born in Mansfield Arkansas April 23, 1925, to Mary and George Harper. He served our country in World War II in the Pacific Theater as a member of the United States Navy. After leaving the Navy, he returned to his home in Arkansas and graduated from the University of Arkansas with a degree in civil engineering. He married Anne Presson in 1948. They moved to Fort Myers in 1951 and began a career in home building, later transitioning to site work and road building. His hard work ethic led Dan Harper to the successes he achieved, mentoring numerous people along the way, many of which are still very active in the local development community. He is survived by his children Danah Cooper Averill (Ernie), Sharon Thompson (Brown), Shawn Harper (Becky), grandchildren Cari Tyler (Tim) Christi Jackson (Jon) Evan Thompson, Daniel Harper (Gloria) Shannon Najar (Matthew), great grandchildren Aylah, Cooper, & Ian Tyler, Brock Jackson, and James Najar. He is preceded in death by his wife Anne Harper. Daniel and Anne Harper raised a loving family and contributed much to the local community for many years. Chief, as known to his grandchildren, great-grandchildren, and his close friends had a heart big enough to love and care for everyone he would encounter. Daniel and Anne Harper founded the Daniel R. and Anne M. Harper Foundation, which currently supports a number of organizations through grants to local organizations assist in their mission to spread God's word, support research and cure of illnesses, quality education for young people and the hunger needs of homeless and displaced families and children. Harper Bros. annually performed construction work for many local organizations on a cost fee basis to help them achieve their missions, asking only that no publicity or special recognition be given. Mr. Harper was content to store up his treasures in Heaven. Daniel was a long-time member of Redeemer Church formerly Cypress Lake Baptist Church. A Funeral Service for Daniel will be celebrated by Pastor Sam Killman at 11:00 AM on Saturday, April 30, 2022 inside the Chapel at Redeemer Church, 8400 Cypress Lake Drive, Fort Myers, FL 33919, (239) 481-5443. Guests will be received for Visitation for an hour preceding this ceremony beginning at 10:00 AM also inside the Church Sanctuary. Following conclusion of these ceremonies, guests will travel in procession under escort from the Lee County Sheriff's Office to Memorial Gardens Cemetery, 1589 Colonial Boulevard, Fort Myers, Florida 33907, (239) 936-0555 where Daniel will be laid to rest inside the Devotion Garden alongside his dearly departed wife Anne. To share a story or photo, leave a tribute or to offer condolences to the family at this difficult time please visit Daniel's memorial webpage at www.fortmyersmemorial.com and sign his guestbook.

Daniel R. Harper, (Chief) beloved husband and father, went to be with his Lord and Savior Jesus Christ on Wednesday, April 20. At the time of his passing, he was at home surrounded by his family. He was a man known for his intelligence, calm... View Obituary & Service Information

The family of Daniel R. Harper created this Life Tributes page to make it easy to share your memories.

Send flowers to the Harper family.