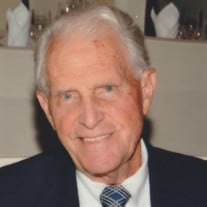 Reverend David Bentley Fountain, age 92, passed away Friday, March 12, 2021 in Fort Myers, Florida. He is now safely in the arms of Jesus Christ, His Savior and Lord, who he faithfully served his entire life. He leaves behind his beloved wife, Mary Lamb Fountain of almost 62 years, his daughter, Ruth Fountain Mitchell (her husband Leland Mitchell) all of Ft. Myers, Florida, his son, Mark David Fountain of California, a grandson, Ryan Kurtz and a great-grandson, Tyler Kurtz. He is also survived by his niece, Katherine Fountain Niles (her husband, Wayne along with their two sons), a nephew, Paul Fountain (wife Jackie and their 4 children)and nephew, Larry Fountain (wife Lisa and their son), His brother, Dr. Daniel Fountain and his wife Miriam preceded him in death. They both served faithfully for many years in the Congo as a missionary doctor and nurse. David was born on August 20, 1928 in Port Jefferson, New York, to Dorothy Payne Fountain and Egbert Pintard Fountain. David spent his growing up years in upstate New York. After graduating from Waverly high school he entered the Coast Guard Academy in New London, Connecticut (graduated 1950). After serving 5 years as both an officer and instructor with the Coast Guard, David entered Eastern Baptist Theological Seminary in 1956 and received his Masters of Divinity in 1958. He served as Minister of Education to the congregation at North Baptist Church, Port Chester, NY and served as pastor at Clifton Park Baptist Church, NY. He was commissioned as a military chaplain with the U.S. Navy in 1964 While serving as a Navy Chaplain he also served with the US Marine Corps as a chaplain in Vietnam from 1968-9, where he received the Bronze Star Medal for valor. Some of his duty stations included several locations in Southern California, Newport Rhode Island, Cape Cod, Massachusetts and Rota, Spain. He retired from the Navy in 1985 with the rank of Commander and began serving as a pastor to several congregations. Some of these included Community Baptist Church and Christ the King, Fallbrook, Ca., First Baptist Coronado, Ca. and First Baptist of Springfield, Oregon. David and his wife Mary moved to Shell Point Retirement Community in May of 2001. David served for a short while as pastor of visitation at the Village Church at Shell Point. They both served together for approximately five years participating in a visitation ministry to retired Baptist pastors and missionaries in California, Arizona, Nevada and Florida. Anyone who was blessed to know David, knew that he was a man who lived life to the full and he loved the Lord. We will miss him dearly, but we look longingly to the promise of our Heavenly Home. What a day of rejoicing that will be! But seek ye first the kingdom of God and His righteousness and all these things shall be added unto you as well. Matthew 6:33 In lieu of flowers, if you feel so led, please consider making a donation to the work of David's niece and her husband in the DRC at the following: Donate on line here. https://portal.internationalministries.org/global-servant-support?sfcampaign=7011N000000Ub 3RQAS OR write a check to International Ministries 1003 W. 9th Ave. Ste. A King of Prussia, PA. 19406 (in the memo line write support for Wayne and Katherine Niles in memory of David Fountain). Donations can also be made to The Village Church at Shell Point 15100 Shell Point Blvd. Ft. Myers, Florida 33908 (memo: support for the minister and missionary fund). A memorial service celebrating David Fountain's life will be held at the Village Church at Shell Point on Saturday, May 22, 2021 at 10am.

Reverend David Bentley Fountain, age 92, passed away Friday, March 12, 2021 in Fort Myers, Florida. He is now safely in the arms of Jesus Christ, His Savior and Lord, who he faithfully served his entire life. He leaves behind his beloved wife,... View Obituary & Service Information

The family of David Bentley Fountain created this Life Tributes page to make it easy to share your memories.

Send flowers to the Fountain family.