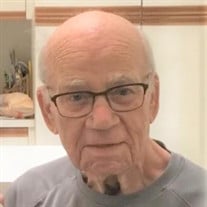 Donald William Maudlin of Sanibel, Florida passed away peacefully on Friday, August 20, 2021 following some recent health challenges. He was 89 years old. Donald was born in Greensburg, Indiana on June 8, 1932, the proud son to Annette (Layton) and William Maudlin. After serving in the United States Navy, Donald married his sweetheart Mary Ann Walker and the couple soon began to raise a family. Donald began working in the banking industry and made that his career, later retiring as Vice-President of the Indiana National Bank. He was a long-time member of St. Isabel Catholic Church of Sanibel, Florida. He enjoyed traveling and treasured the outdoor life on Sanibel Island. He was a beloved husband, cherished father and loving grandfather who will be dearly missed. Donald leaves to cherish his loving memory his children, Cindy Hughes (Steve), David Maudlin and Michael Maudlin (Karen). He is also survived by six loving grandchildren; Chris, Lauren, Megan, Jason, Patrick and Zachary. Sadly, he was preceded in death by his devoted wife Mary Ann who passed away in 2017 and his loving daughter Paula Smith who passed away in 2020. A Funeral Service for Donald will be celebrated by Deacon Jim Tesoriero at 11:00 AM on Saturday, August 28, 2021 inside the Chapel at Fort Myers Memorial Gardens Funeral Home, 1589 Colonial Boulevard, Fort Myers, Florida 33907, (239) 936-0555. Friends will be received for Visitation for an hour preceding this ceremony beginning at 10:00 AM also inside the funeral home chapel. At the conclusion of these ceremonies, family and friends will recess to adjacent Memorial Gardens Cemetery where Donald will be laid to rest alongside his dearly departed wife Mary Ann inside the Green Lea Estates Section. To share a story or photo, leave a tribute or to offer condolences to the family at this difficult time please visit Donald's memorial webpage at www.fortmyersmemorial.com and sign his guestbook.

The family of Donald William Maudlin created this Life Tributes page to make it easy to share your memories.

Send flowers to the Maudlin family.