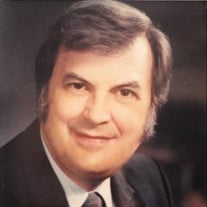 Donald Wayne Pickens, 88, of Lehigh Acres, passed away Wednesday, September 22, 2021 Following an extended illness. He was born May 16, 1933 in Cedar Falls, IA to Joseph and Edith ((Kelley) Pickens. He moved to Florida in 1997 from Westminster,... View Obituary & Service Information

The family of Donald Wayne Pickens created this Life Tributes page to make it easy to share your memories.

Send flowers to the Pickens family.