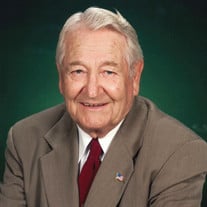 Elmer Norton Blair of Cypress Cove in Fort Myers passed away peacefully at his residence on October 9, 2021 following some recent health challenges. He was 102 years old. Elmer was born in Prince, West Virginia on December 24, 1918, the proud son to Katharine (Seelinger) and James H. Blair. He spent his working life in service to our country as a member of the Armed Forces. Elmer retired at the rank of Major after 20-plus years with the United States Army, including combat service and 4 Battle Stars earned during World War II. He was also a recipient of the Bronze Star and Combat Infantry Badge. After retiring, he worked as a government civilian for the Armed Forces Morale Welfare and Recreation in the United States, Europe, and Japan. Elmer graduated from Woodrow Wilson High School in Beckley, West Virginia in 1937. After high school he worked for several coal mining companies in the Beckley area. After retiring from the Army, he continued his education, graduating in 1963 from Austin Peay State University in Clarksville, TN with a BS degree in Health and Physical Education. Elmer was a member of the First Christian Church in Clarksville, TN. When he moved first to Sanibel and then to Ft Myers he joined the Sanibel Community Church. He remained active in the Veterans Club at Heritage Palms in Ft Myers and the Cypress Cove Veterans organization where he resided. Elmer was an avid sportsman and participated as a professional boxer and semi-professional baseball player before his call to serve in World War II. He continued by coaching baseball and basketball. He loved bowling, golf, and spent many hours fishing along side his wife, Evelyn. After moving to Ft. Myers, he could be seen regularly riding his three wheel bike wearing his military service cap. He was the devoted husband of 61 years to his loving wife Evelyn M. (Kincaid) Blair who sadly preceded him in death back in 2002. He was the loving father to his cherished daughters Sharon Freehill, Constance Clark, Deborah Donahue and Donna Dyer. Elmer was also grandfather to 9 grandchildren, 15 great grandchildren, and 1 great great grand child. Immediate funeral ceremonies are private and the family is planning a Celebration of Life for Elmer which will take place at Cypress Cove. Burial will thereafter take place at Arlington National Cemetery in the nation's capital, where Elmer will be laid to rest alongside his previoulsy departed wife Evelyn on a date to be determined. Donations can be made to Wounded Warriors, American Heart Association or organization of your choice. To share a story or photo, leave a tribute or to offer condolences to the family at this difficult time, please visit Elmer's memorial webpage at www.fortmyersmemorial.com and sign his guestbook.

Elmer Norton Blair of Cypress Cove in Fort Myers passed away peacefully at his residence on October 9, 2021 following some recent health challenges. He was 102 years old. Elmer was born in Prince, West Virginia on December 24, 1918, the proud... View Obituary & Service Information

The family of Elmer Norton Blair created this Life Tributes page to make it easy to share your memories.

Send flowers to the Blair family.