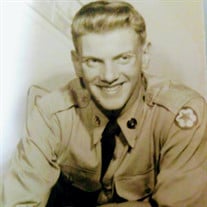 Gene (Eugene David) Swimer, 84, of Ft. Myers, passed away after a very brief battle with Covid, and a longer battle with dementia on 01/15/2022 at Evan's Healthcare in Ft. Myers, FL. Yes, he was fully vaccinated. He was very frail at a whopping 130 lbs after breaking both hips in the past year. Devout in his Jewish faith, he always wore his Star of David. Gene was born on 09/03/1937 in Cleveland, OH where he attended high school and attained his GED in 1956. Gene then joined the U.S. Army for four years-one of which he served in Korea. Soon after, he moved to Dayton, OH for many years, where he married and started a family. Gene had many jobs throughout the years...some more colorful than others. He was forever the salesman. Eventually, Gene remarried and moved to the sunshine state, where he lived out the remainder of his life. Gene spent a majority of his working career in pest control, eventually owning National Exterminators in Ft. Myers until retirement. After which, he worked at a cigar smoke shop part time...as that gave him access and a discount on his favorite stogies. When Gene wasn't working, he could usually be found golfing, lounging in the hot tub, fishing on his Grady White, or waiting for "The Big One" to come in at Immokalee. Our Dad had a rich life. He lived by his own rules. He had his wins and losses, but he did it his way. Dad, you are loved, and will be sorely missed... as will the sound of Zippity Doo-Da that rings in my head. Gene was preceded in death by his parents Yetta (Nash) and Meyer (Myron) Swimer. He is survived by his sister Sandra (Ben) Sakadjian, his children Gregory (Melissa) Schreck, Rob (Rhonda) McLaughlin, David (Donna) Swimer, Tamara (Kurt) Smith, and Tara (Kevin Maloney) Swimer, and a hoard of grandchildren. Gene's wish was to cremated and spread at sea. No formal services will held. Fly high, big Daddy!

Gene (Eugene David) Swimer, 84, of Ft. Myers, passed away after a very brief battle with Covid, and a longer battle with dementia on 01/15/2022 at Evan's Healthcare in Ft. Myers, FL. Yes, he was fully vaccinated. He was very frail at a whopping... View Obituary & Service Information

The family of Eugene (Gene) David Swimer created this Life Tributes page to make it easy to share your memories.

Send flowers to the Swimer family.