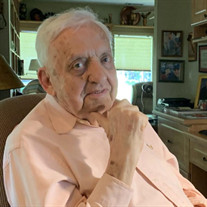 “I am a writer.” That’s the way Fenton proudly liked to define himself. He died Wednesday, January 6, 2021 in Savannah, Georgia. He was 97. Fen’s career spanned over 60 years as a news reporter and editor, advertising creative director, public relations executive, and author. Born in Detroit, MI June 24, 1923, he was the son of Fenton Ernst and Lillian Ludtke. He grew up in Highland Park, MI, and graduated from Cranbrook preparatory school in Bloomfield Hills, MI. He entered Dartmouth College in 1942, and left in 1943 to join the U.S. Army’s 503rd Military Police Battalion. He served at the headquarters of Gen. George S. Patton, landing in the Normandy invasion and participating in the Battle of the Bulge. He was awarded five battle stars, in addition to earlier service under Patton in Casablanca, Morocco. Fenton returned to Dartmouth In 1946, and graduated with a BA degree in political science. In 1949, he became a cub reporter at the Pontiac, MI Daily Press, and later its city editor, before joining the Detroit bureau of the Associated Press in 1953 as its state editor. He changed careers in 1956 and became a copywriter at Campbell Ewald advertising agency in Detroit. He became a vice president and associate creative director on such accounts as Chevrolet, Boeing, Hertz and National Steel. Fenton advanced to serving as assistant to the president and then the chairman, and in 1967 was briefly loaned by the agency to New Detroit, an urban coalition formed to address problems growing out of riots in the city. He created a radio and television show, “Buzz the Fuzz” to improve police communications with the community. Fenton served on the American Association of Advertising Agencies’ committee meeting in Washington on issues involving the advertising industry. His community service in Detroit also included being a director of the International Institute, the Children’s Museum, Planned Parenthood, and activities with the Detroit Chamber of Commerce and the Better Business Bureau. He formed the public relations firm of Hall, Ludtke and Gordon in 1970, and later joined Chrysler Corporation, a client. He retired in 1989. His writing continued as author of a collection of his poetry, “On the Importance of Being Naughty.” Besides his parents, Fenton was preceded in death by his wife of 58 years, Jeanne M. Jipson and his sister Phyllis N. Torbet. He is survived by his daughter, Cooley Ludtke of Troy, Michigan and former wife Barbara J. Ludtke of Savannah, Georgia. The family would like to thank his friends and caregivers for their love and attention. They request any tributes be to the Salvation Army. A memorial service will be planned in the future.

The family of Fenton A. Ludtke created this Life Tributes page to make it easy to share your memories.

Send flowers to the Ludtke family.