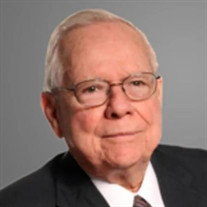 Frank Anthony Pavese Sr. entered into Eternal Rest at his home in Ft. Myers, FL on April 14, 2021. Frank was born February 29, 1924, in a small cottage, still located on Jackson Street in Fort Myers, FL. Frank was the beloved son of Michael P. Pavese of Lorenzana, Italy and Theresa D’Alessandro Pavese, New York who became early pioneers of Fort Myers. He was brother to Frances Miller, Louise Clark and Nettie (Honey) Edrich all who preceded him in death. Frank was a loving husband to Marlene Garofano Pavese who preceded him in death November 2006. They had five children, Donna, Michael Sr. (Kim Koopman), Frank Jr. (Joanne), Thomas and Paul (Donna) all of Fort Myers. He has also left behind eight grandchildren, fourteen great grandchildren and many cousins, nieces and nephews. As a young boy, Frank attended Edison Park Elementary and would accompany his father to the home of Thomas Alva Edison, where he would look on as his father was Mr. Edison’s personal barber. Frank attended Fort Myers High School graduating in 1942. Frank served in the United States Army for three years, two of which he served overseas in the European Theater Operations and was awarded three combat stars. One of his favorite army stories is affectionately referred to as Private Kowalski. Following the war, Frank returned to the University of Florida where he received his law degree in 1949. He then returned to Fort Myers, an avid Gator fan for life and began his law practice as a sole practitioner in the same year. To keep up with the demands of a growing community, Frank’s practice also grew. Frank was immensely proud of his law practice, his law partners and his support staff. In his honor, after his retirement, his law partners named the practice Pavese Law Firm. Frank had many professional experiences throughout his law career. Some of which include being elected Lee County Prosecutor; County Attorney for the Lee County Board of Commissioners; Attorney for Lee County Hospital Board; President of Florida Association of County Attorneys; Attorney for Captiva Erosion Prevention District; as well as Attorney for Lee County Mosquito Control District and Lee County Hyacinth Control District. Frank also held many Bar Office(s) throughout his law career, including President of the Lee County Bar Association, Member of Committee on Condemnation and Condemnation Practice, Member of the Eminent Domain Committee, and Member of the Association of Trial Lawyers of America and Academy of Florida Trial Lawyers as wells as a member of the America Bar Association and Florida Bar Association. Frank retired on December 31, 2004 from Pavese Law Firm in Frank was also involved in many civic and community activities, though the ones dearest to him were those pertaining to his Catholic Faith. Frank was President of Catholic Adoption Society, President of Catholic Welfare Agency through St. Francis Xavier Church, President of St. Francis School Board, President of Bishop Verot High School Board, Grand Knight of Knights of Columbus and a founding member of St. Cecilia’s Catholic Community, where he remained a member until his passing. Frank was also awarded many honors throughout his years, one of his most memorable days was when Lee County Commissioners proclaimed June 2nd, 2015 as Frank A. Pavese Sr. Day to honor his contributions to this region. When Frank was not busy with his law career as well as civic and community activities, he enjoyed spending time with his family and friends. Many weekends Frank was out on the Hunting Lease with his sons and friends calling up turkeys and telling stories around the evening campfires. He enjoyed meeting the “Coffee Club” at different locations through the years. The last time this wonderful group of men met was this past February at Frank’s home to celebrate his 97th birthday. Family and friends are invited to share in a Mass of the Resurrection for Frank, which will be held at St. Cecilia’s Catholic Community, 5632 Sunrise Drive, Ft. Myers, on Saturday, May 8th at 10:00 am. A private burial will follow for immediate family. In lieu of flowers, Memorial contributions may be made to The Frank A. Pavese, Sr. and Marlene Pavese Donor Fund c/o The Southwest Florida Community Foundation, 2031 Jackson Street, Suite 100, Fort Myers, FL 33901.

The family of Frank A. Pavese Sr. created this Life Tributes page to make it easy to share your memories.

Send flowers to the Pavese family.