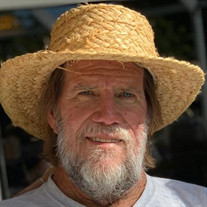 Gary Bonwell left this earth on January 8, 2021 at the age of 68 in Fort Myers, Florida where he lived for almost 40 years. His battle with heart disease in recent years showed his courage in facing life’s challenges with a smile. He was a true fighter who had nine lives. Gary was born in Indianapolis, Indiana on February 15, 1952 to the late Richard and Barbara Bonwell. He attended Southport High School with the class of 1970. Gary grew up with his brother, Dan, who was included in every childhood story. Later, his sister Dana joined the family and became his little shadow. He and his siblings had a tradition of attending the Indianapolis 500 together. Gary loved his sister and brother and their relationships grew stronger after they lost their parents at an early age. Sadly, he lost his brother to heart disease and MS in 2019. When he was in his 30’s, Gary decided he couldn’t live with snow, left his construction company, moved to Florida and never left. He started his own landscaping business which he had for almost 40 years and was managing until the end. His son, Austin, joined him in his business 7 years ago and will continue to run Bonwell Landscaping just as Gary planned. In 1992, Gary met the love of his life, Tricia, while she was vacationing in Florida. It was love at first sight but after a week, she had to return home to England. It wasn’t long until Gary decided that he could not live without her and went to England to meet her parents before proposing! They were married for 27 years. Gary and Tricia lived a beautiful life filled with love. Gary had three children, Cara Bonwell-Orr, Austin Bonwell (25), and Erica Bonwell (23). They couldn’t have asked for a more loving, caring person as a father. Austin was his mini-me, Erica was his baby girl, and Cara was the first to make him a proud father. He also has a son-in law, Sean Orr, and a granddaughter, Mila Orr (10). His children and grandchild will miss spending time at the beach with him, watching Bar Rescue, laughing with him, and soaking in his never-ending love and support. Gary also has two dogs, Lucy and Sheba, who will miss his cuddles. Gary will be missed by his sister, Dana Raco and sister-in-law, Lisa Johnson; niece, Morgan Raco; nephew, Jesse Raco; and great nephew, Jayden Harshman (5) in Florida and his sister-in-law, Rose Bonwell, in Indiana. He will also be missed by his in-laws, Paul and Margaret Bromley and Alan and Kathleen Bromley, and nieces and nephews in England. He was an important part of both extended families and they were an important part of him. Gary had a long list of friends who were like his family from Indiana to Florida. He had friends from every stage of his life. He was loyal, funny, and dependable. He will be missed by many friends who will continue to be family to his wife and children. Gary was a master story teller and had a very colorful life to talk about! He would talk about hitchhiking across the country, watching Evil Knievel jump the Grand Canyon live, being the first streaker at the Indy 500, bungee jumping, wrestling a bear at the fair, scuba diving, or other crazy adventures. His hobbies included playing softball (in his younger years), watching westerns, riding his Harley, spending time at the beach, cruising in his Volkswagen van, and drinking Budweiser. He went on a yearly Indy 500, Homestead, and Daytona 500 trip with friends which always resulted in stories for later. Gary loved spending time with his family and friends and always made people around him feel special. He never met a stranger, only a friend he hadn’t made yet. He truly was loved by everyone he met whether it was his customers, the doctors and nurses that cared for him, his longtime friends, and of course, his family. It’s hard to imagine a world without him in it. Due to risks from Covid, Gary will be honored in a celebration of life in late summer of 2021. In lieu of flowers, the family asks that you make a donation to the American Heart Association or plant a tree in his name. To share a story or photo, leave a tribute or to offer condolences to the family at this difficult time please visit Gary's memorial web page at wwww.fortmyersmemorial.com and sign his guestbook.

Gary Bonwell left this earth on January 8, 2021 at the age of 68 in Fort Myers, Florida where he lived for almost 40 years. His battle with heart disease in recent years showed his courage in facing life&#8217;s challenges with a smile. He was... View Obituary & Service Information

The family of Gary Ross Bonwell created this Life Tributes page to make it easy to share your memories.

Send flowers to the Bonwell family.