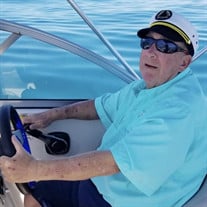 Gary Allen Fischer, 68, a two year resident of Cape Coral, FL, formerly of Cary, IL passed away Thursday, December 31, 2020 in Cape Coral, FL. He was born February 7, 1952 in Chicago, IL to the late Hugo and LaVon Fischer. Gary was….a loving husband, A wonderful father, and adored his grandchildren. He was the owner of Gage Grinding company in Cary Illinois, which was family run for over 50 years. He was a member of the eagles club in Cape Coral. His passion in life was socializing. Gary talk to everyone, He never met a stranger. He enjoyed boating his whole life. He started boating as a child on the chain of lakes in Illinois and also Lake Michigan, Along with his father Hugo. When he moved to Florida his passion was boating on the Caloosahatchee River and gulf of Mexico. If Gary wasn’t boating he was playing golf. He spent 25+ years traveling to our home in Arizona with all his golf buddies. He never came home without a lot of great memories, Which then was awarded the Jackalope. So here’s to Gary, (“ LETS ALL HAVE A FINAL FINAL “) He is survived by his loving wife of 44 years, Amber Fischer of Cape Coral, FL; three children, Hope Pesek (Bob) of Cary, IL, John Fischer (Jennifer) of Richmond, IL and Jim Fischer (Rebecca) of Cary, IL; one brother, John Fischer of Cape Coral, FL; five grandchildren, River, Elizabeth, Madeline, Harper and Jacob; as well as many extended family members and friends. No formal services are planned at this time. Memorial contributions may be made to the American Cancer Society in loving memory of Gary Allen Fischer. Fort Myers Memorial Gardens Funeral Home is entrusted with final arrangements, 1589 Colonial Blvd., Fort Myers, FL 33907. (239) 936-0555.

The family of Gary Allen Fischer created this Life Tributes page to make it easy to share your memories.

Send flowers to the Fischer family.