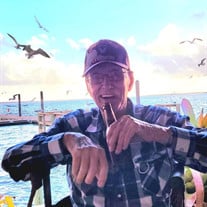 Guy Hillman Hubbard, born September 18, 1931, had a lot of fun. A Fort Myers pioneer, growing up in the heart of the city, he was the leader of all his cousins. He taught them how to swim, ride bicycles and play sports. A natural born athlete, Guy was a starting wide receiver for the Fort Myers Green Wave when the practice field was full of sandspurs. Tall and thin with long arms, he was good at baseball and boxing, too. He didn’t start many fights, but he ended a lot of them. And he could dance the jitterbug. All the girls wanted to dance with him and all the guys looked up to him, not because he was tall, but because he was a good guy. If he cared about you, he looked after you. Guy was proud to serve his country as a United States Army Paratrooper in the 11th Airborne Division. He worked as a lineman for Lee County Electric Cooperative for many years, climbing poles and maintaining power lines. A man of faith, Guy helped others fortify their faith as a Pentecostal preacher. He had a strong voice and a strong message, sincere in his love for his family and his Lord. One of the founding coaches of the North Fort Myers Pop Warner football program and North Fort Myers Little League, Guy’s players respected him so much they still bought the ol’ ball coach dinner well into his eighties. Guy married the love of his life, Iris Faye Hubbard, on December 11, 1967. Guy and Iris had a big family and a small house but they always brought everyone together and everyone was cared for under their roof. Status did not matter to them, just togetherness. Guy considered it an honor to be Iris’ primary caregiver in her final years. After missing her for 12 years, Guy and Iris are together again, dancing in Heaven, as he often said they would be. On March 18, he was also reunited with his son, Guy Michael, his mother, Abbie Love, his father, George, brothers, Alan and Willis, and sister, Barbara. He lives on through his five, living children, 17 grandchildren, 26 great grandchildren and seven great, great grandchildren. He loved them through all their endeavors and taught them all to live life, smiling. A Graveside Service will be held 10:00 AM, Saturday, April 2, 2022 in the Field of Honor section of Memorial Gardens Cemetery, 1589 Colonial Blvd., Fort Myers, FL where we will have Military Honors presented by the United States Army. Celebration of Life Luncheon taken place at Shell Factory following the service at approx 11:30 AM.

Guy Hillman Hubbard, born September 18, 1931, had a lot of fun. A Fort Myers pioneer, growing up in the heart of the city, he was the leader of all his cousins. He taught them how to swim, ride bicycles and play sports. A natural born athlete,... View Obituary & Service Information

The family of Guy Hillman Hubbard created this Life Tributes page to make it easy to share your memories.

Send flowers to the Hubbard family.