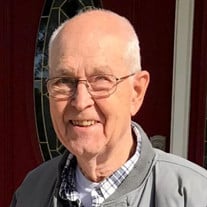 Henry “Aubrey” Jackson Jr., 84, of Fort Myers, formerly of Cape Coral and Virginia Beach, passed away Tuesday, October 26, 2021. He was born July 30, 1937 in Norfolk, VA to Henry Aubrey Jackson Sr. and Edgeworth (Padon) Jackson. He and his wife Jackie moved to Cape Coral from Virginia Beach in 2000. Aubrey Jackson was an outgoing person who never met a stranger and was always ready to joke around. He loved serving God and was a very dedicated charter member of King's Grant Baptist Church in Virginia Beach for many years. In addition, he was an involved member of First Baptist Church of Cape Coral and most recently he was a devoted member of Cape Baptist Church. He attended Hargrave Military Academy and Norview High School as a teenager. Upon high school graduation, he began working as an office helper then eventually a draftsman in a local architecture firm in Norfolk. After ten years, as allowed by Virginia law at the time, he began the process to study and apply to be a licensed Architect in Virginia. In 1973, he passed the exam and achieved becoming an Architect through this rare path. From 1977-1989, he and a partner ran a successful firm that grew to employ over 20 associates in Virginia Beach, VA. For the five years following that, he ran his own one-man firm, then worked for another firm in the area for several more years. In 2000, Aubrey and Jackie built a house and retired in Cape Coral, FL. It did not take long, and Aubrey was back at part time work for a local Architecture firm in Florida for a number of years before retiring once again. Aubrey was preceded in death on August 24th, 2021 by Jackie his wife of 62 years. Aubrey is survived by his daughter, Jennifer J. Zwirschitz (John) of Yorktown, VA and two grandchildren: Abby and Jackson. The family is still determining the best way to allow friends and family in Florida and Virginia to honor Aubrey. Exact details are forthcoming. Immediate family will attend an additional memorial service to place Aubrey’s urn in the columbarium at King's Grant Baptist Church in Virginia Beach. Funeral arrangements are under the direction of Fort Myers Memorial Gardens Funeral Home, 1589 Colonial Blvd., Fort Myers, FL 33907, 239-936-0555.

The family of Henry Aubrey Jackson Jr. created this Life Tributes page to make it easy to share your memories.

Send flowers to the Jackson family.