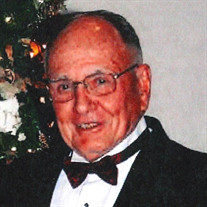 Hubert L. (Dick) Kreeger, age 97, a longtime resident of Seven Lakes in Fort Myers, FL, passed away peacefully on March 3, 2022. He was born May 1, 1924, in Lee’s Summit, MO, the youngest son of Hiram and Joyce Kreeger. He married Patricia Kuncl on April 15, 1944, in Madison, WI. He later married Muriel Seaman in 1987. He was preceded in death by his parents and two brothers, Robert and James. Surviving are his wife, Muriel, two sons, William (Judy) Kreeger and Terry (Julie) Kreeger, four grandchildren [Michelle (Randall) Goldammer, David (Angela) Kreeger, Pamela (Brian Frushour) Kreeger, Andrew (Erin) Kreeger] and eight great-grandchildren (Luke, Mark, and Kayla Goldammer; Abigail and Kaitlyn Kreeger; Nathan and Micah Frushour; Arden Kreeger). Dick graduated from Blue Springs High School in MO in 1941. He was drafted into the Army in the fall of 1942 and sent to Riley, KS, Cheyenne, WY, and Iowa City, IA, where he went to a five-month Army training program at the University of Iowa. Dick was sent to Camp Randall in Madison, WI, in March, 1944, where he did radio repair and taught school. He was released from the Army in 1946 and then went to the University of Iowa where he graduated in 1948 with a B.S. in commerce. Dick worked for Caterpillar Tractor Co. (later Caterpillar Inc) from 1944 to 1983. During this time, he worked in Peoria, IL, then was transferred to Aurora, IL, as an auditor then cost manager. In 1964 Dick was transferred to Gosselies, Belgium, where he served as cost accounting manager, returning to Caterpillar in East Peoria, IL, as cost accounting manager until he retired in 1983. Dick moved to Fort Myers in 1985. During their time at Seven Lakes, Dick and Muriel enjoyed many activities, such as golf, dancing, fishing trips, and traveling. Cremation rites have been accorded. Private interment will be at Fort Myers Memorial Gardens. Memorial contributions may be made to the Salvation Army of Fort Myers on McGregor Blvd or Hope Hospice of Fort Myers. A celebration of life will be scheduled for later at Seven Lakes in Fort Myers.

Hubert L. (Dick) Kreeger, age 97, a longtime resident of Seven Lakes in Fort Myers, FL, passed away peacefully on March 3, 2022. He was born May 1, 1924, in Lee&#8217;s Summit, MO, the youngest son of Hiram and Joyce Kreeger. He married Patricia... View Obituary & Service Information

The family of Hubert "Dick" Kreeger created this Life Tributes page to make it easy to share your memories.

Send flowers to the Kreeger family.