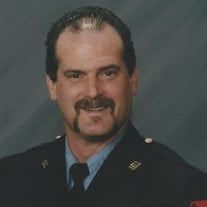 James S. Howard of Lehigh Acres, FL passed away on September 5, 2021 at the age of 62. He was born September 6, 1958 to George and Carol. He was a volunteer fire fighter for Cleves Volunteer Fire Department from 1983 until 2003, he retired from Ineos (Monsanto) in 2016. He married the love of his life, Rebecca on June 17, 1994 on the back of a fire truck! He was the loving daddy to his three children, Amanda (Jason Shrewsbury), Jennifer Eckert (Andrew Johnson), and James Howard II. Jim enjoyed spending his time with family and friends, his puppies, air craft simulation, riding around in his jeeps, painting beautiful scenery, and building intricate models. He always had a joke to tell and was quick witted, loved laughing and was the master at dad jokes. His smile could light up the darkest room, and he had a fan club no matter where he went. His love for God and his family was as huge as his heart. Survivors include his loving wife Rebecca V. Howard, daughters Amanda (fiancé Jason), Jennifer Eckert (Andrew), and son James S. Howard II, grandchildren Cheyanne, Laura, Savanna, John, Marky, Keith Allan, Zoey, Kylee, and Annie, brother Sam Howard, sister-in-law Judy (Skip) Simons, many aunts and uncles, cousins, and nieces. Jim was preceded in death by his parents George Howard, Carol (Larry) Lipscomb, grand-daughter Alexandra, and nephew Keith. In leu of flowers the family is asking for donations to be made in Jim’s honor to either: SAAP-(stray animal adoption program) in Northern Kentucky, P.O. Box 72040 Newport, Kentucky 41072, (859) 391-1234 or on the internet at: https://adoptastray.com/donate/ Gulf Coast Human Society in Fort Myers, 2010 Arcadia Street, Fort Myers, Florida 33916, (239) 332-0364 or on the internet at: https://www.gulfcoasthumanesociety.org/donate.html Immediate funeral arrangements are private and are under the direction of Fort Myers Memorial Gardens Funeral Home, 1589 Colonial Boulevard, Fort Myers, Florida 33907, (239) 936-0555. To share a story or photo, leave a tribute or to offer condolences to the family at this difficult time please visit the memorial webpage for James located at www.fortmyersmemorial.com and sign his guestbook.

James S. Howard of Lehigh Acres, FL passed away on September 5, 2021 at the age of 62. He was born September 6, 1958 to George and Carol. He was a volunteer fire fighter for Cleves Volunteer Fire Department from 1983 until 2003, he retired from... View Obituary & Service Information

The family of James Samuel Howard created this Life Tributes page to make it easy to share your memories.

Send flowers to the Howard family.