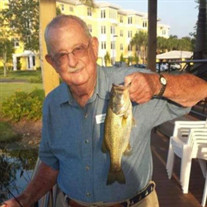 Mr. James Gordon Jennings Jr., son of James Gordon, Sr. and Marie Jennings (both deceased), passed away on December 30, 2020 at age 87 peacefully in Fort Myers, Florida. He is survived by his wife, Elaine of 37 years, son Gordon III (Kathy), daughter Virginia Iszard (Charles), and four grandchildren, Alana and Asia Jennings, and Charles Jr. and Catherine Iszard. He is also survived by two stepchildren with Elaine, Laura Powell (Larry), her children, AJ and Nicholas, and David Talia (Stephanie), and his child Austin. Gordon was born and raised in Roanoke, Virginia. He attended Virginia Polytechnic Institute and Southern Polytechnic State University, his beloved Georgia Tech, where he studied mechanical and industrial engineering. He proudly served in the U.S. Army from 1956-1962. Shortly after his service in the Army, Gordon fulfilled his lifelong wish of moving to Florida where his mother was originally born. He retired in 1995 and spent his last 9 years happily in retirement at Cypress Cove with Elaine. Gordon thrived in retirement with Elaine. His recent maritime first place miniature sailboat trophy was a grand achievement. Gordon’s woodworking craft produced treasures for all his grandchildren, but his enthusiastic fishing pursuits are what he will be most remembered. A small military service will be held on Friday, February 5th, 2021. In lieu of flowers, please make a donation to Hope Hospice (https://hopehospice.org). The mailing address is 9470 Health Park Circle Ft Myers, FL 33908. Funeral arrangements are under the direction of Fort Myers Memorial Gardens Funeral Home, 1589 Colonial Blvd., Fort Myers, FL 33907, 239-936-0555. Online condolences may be offered at: www.fortmyersmemorial.com.

The family of James Gordon Jennings Jr. created this Life Tributes page to make it easy to share your memories.

Send flowers to the Jennings family.