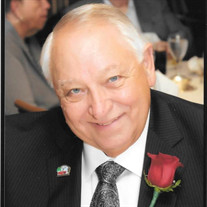 JAMES DUANE WOOD January 21, 1938 – September 23, 2021 Jim was born in Hayward, Wisconsin on January 21, 1938 and the family later moved to Brainerd, Minnesota, where he was raised. His father owned a Chrysler-Plymouth dealership, where Jim worked until 1966. He later moved to Minneapolis, where he met his future wife, Jodi. They were married in 1971 and moved to Fort Myers, Florida in 1973. Jim started Wood Motor Company in 1976 and served the community for 45 years, where his son Thomas Webber also worked. He loved cars and had many restored antique automobiles over the years. He was a member of several organizations, including the Florida Independent Automobile Dealers Association (FIADA), the National Independent Automobile Dealers Association (NIADA), and the Edison Chapter of Kiwanis. Jim was a very active Mason and Shriner. He was a Master Counselor of Demolay for 57 years and was raised by his father into Aurora Lodge. He became a member of the Scottish Rite in 1989 and joined Araba Shriners in 1990. When the Fair Board assumed management of the Lee Civic Center, Jim became the first Treasurer and served until 2004. He served Araba Shriners for many years and was elected Potentate in 2011. He joined several units: The Oriental Band, Tin Lizzies and finally the Jeepsters and enjoyed participating in many community parades over the years. He was also a member of the Fort Myers Beach Lodge, Hillbillys, Araba Sharpshooters and the Order of Queztacoatl, where he became Oket in 2017. Jim was preceded in death by his parents, Wilbur and Lila Wood, and his two sisters, Sharon Sargent and Yvonne Vinje. He is survived by his loving wife of 50 years, Jodi and 7 children: Gregory Wood (Val), Cindy Gronning (Mark), Lisa Wood, Thomas Webber, Sharon Chrovian (Daniel), James (Jamie) Wood, Jr., and Cathy LaMantia, and 18 grandchildren and 8 great-grandchildren. He will be lovingly remembered for his devotion to his family, warm friendships, wonderful smiles, integrity and great hugs. We will miss him forever! His suffering is over and we know God has welcomed him home. Memorial services will be held on Saturday, October 23, 2021 at 2:00 PM at Fort Myers Beach Lodge, #362 F. & A.M., 17671 Pine Ridge Road, Fort Myers Beach, FL. Memorial contributions may be made to Shriners Hospitals For Children, 2500 Rocky Point Drive, Tampa, FL 33607 or to the American Cancer Society, www.cancer.org. Funeral arrangements are under the direction of Fort Myers Memorial Gardens Funeral Home, 239-936-0555.

JAMES DUANE WOOD January 21, 1938 &#8211; September 23, 2021 Jim was born in Hayward, Wisconsin on January 21, 1938 and the family later moved to Brainerd, Minnesota, where he was raised. His father owned a Chrysler-Plymouth dealership, where... View Obituary & Service Information

The family of James Duane Wood created this Life Tributes page to make it easy to share your memories.

Send flowers to the Wood family.