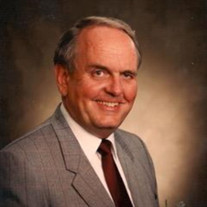 The morning of November 25, 2021, Jerry Edward Horne of Ft. Myers, Florida ended his earthly journey after a ten year battle with dementia. Thanksgiving was the perfect day because family and friends are full of gratitude that Jerry’s suffering has ended and he has entered eternity with his Savior and Lord. While it was a long goodbye, we are grateful that he retained kindness and tenderness till the end. Jerry, along with his twin and favorite sister Joan, were born on April 18, 1939 in Detroit to Henry and Myrtle Horne. Jerry graduated from Redford Union High School and briefly attended Kings College before being hired by the college president to run their Christian radio station. He married Delores Steinbach, his high school sweetheart, on September 12, 1959, moved to Holland, Michigan and together they raised two sons, Daniel and David. Jerry loved technology and was fascinated by the next big thing. He was a pioneer in telephone answering, cellular and paging services. Jerry and Dee took over a fledgling Manpower franchise in the hopes of one day putting their boys through college. In time the business expanded to seventeen offices in West Michigan and put many others through college in addition. Jerry would tell you the secret of his business success wasn’t that he was so smart but that he surrounded himself with smart people. However, he did receive an Honorary Doctorate in Business from Taylor University. Sought out for his wisdom and generosity, Jerry served on many boards including Taylor University, Lifeline Family Center now Thrive, and Hiawatha Youth Camp. Jerry had the courage of a lion, an adventurous spirit and an insatiable appetite for friends and pecan pie. Jerry lived big and had a passion to include everyone in the party. He worked hard ON BUSINESS, buying bigger boats so no one was ever left on the dock. He was generous toward anyone who was in need and especially committed to causes that would spread the Good News of Jesus Christ around the world. Jerry is survived by his wife of 62 years, Dee, his sons, Dan and Crystal Horne and Dave and Dina Horne, eight grandchildren and four great-grandchildren. A Memorial Service will be held Friday December 10 at 2pm The Village Church at Shell Point, 15100 Shell Point Blvd, Ft. Myers, FL 33908 Visitation will follow the service Officiated by Rev. David Horne and Rev. Dina Horne In lieu of flowers, memorials may be made to the Taylor University Film and Media Department in Upland, Indiana or Thrive in Cape Coral, Florida.

The morning of November 25, 2021, Jerry Edward Horne of Ft. Myers, Florida ended his earthly journey after a ten year battle with dementia. Thanksgiving was the perfect day because family and friends are full of gratitude that Jerry&#8217;s... View Obituary & Service Information

The family of Jerry Horne created this Life Tributes page to make it easy to share your memories.

Send flowers to the Horne family.