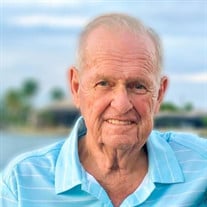 John Charles Bacon, 83, of North Fort Myers, Florida, peacefully passed away on June 23, 2021 surrounded by his wife Carol Bacon, daughter Candace Stevens and son-in-law Vern Stevens. John Charles Bacon was born on January 11, 1938 to Paul CT Bacon, MD and Christine Shaw Bacon in the town of Springfield, Vermont. After graduating high school from Deerfield Academy in Deerfield, Massachusetts, he attended the University of Vermont before serving in the United States Army. Following service, he pursued a degree in Business Administration at Babson College in Wellesley, Massachusetts. In 1960, Jack met his bride Carol Eastwood Bacon while attending college and they were married June 23, 1962. They eventually returned to Springfield, Vermont to raise their children. It was with great pride that he began the John C. Bacon Insurance Agency and later expanded it to add Financial Services. Among his many activities, he and his wife were members of the Appalachian Mountain Club and hiked all 64 of the 4,000 foot mountains in New England. He was an avid skier and was on the volunteer ski patrol at Okemo Mountain for 25 years. He and his wife owned a power boat named “No Regrets” and enjoyed motoring the lakes of New England and shores of Florida. He was a talented musician, singing the lead role in many plays, playing the guitar, ukulele and organ. While at Babson College, he joined the fraternity Delta Sigma Pi, he was President of the Theatre Guild and a member of a men’s octet called the “Opis”. Jack was a member of St. John’s Masonic Lodge in Springfield, Vermont, Member of the Scottish Rite and York Rite bodies. He was Past Potentate of Mt. Sinai Shrine Temple #3 in Montpelier, Vermont. He was an associate member of the Araba Shrine Temple in Fort Myers, FL and the Cibiri International. He was past director of Montpelier Court of the Royal Order of Jesters and past treasurer of Fort Myers Court. Jack retired in 2002 and moved to Cape Coral, FL. During retirement, he enjoyed time on the boat, and with the Mariners of Araba Shrine Temple, and most importantly, time spent with friends and family. Jack is survived by his wife of 59 years, Carol Bacon, his son John C. Bacon, Jr, his daughter Candace Stevens, Son-in-Law Vern Stevens, and Grandsons Zachary Stevens and Devan Stevens. Services will be held at Cape Coral First United Methodist Church, 4118 Coronado Parkway, Cape Coral, Florida on Saturday, July 17, 2021 at 11:00 am and a reception to follow. Graveside services will be conducted at the Sarasota National Cemetery on Monday, July 19, 2021. In lieu of flowers, please consider a donation to the Shriners Hospital for Children, 51 Blossom St, Boston, MA 02114, by either mailing a donation or using the link www.lovetotherescue.org. Fort those unable to attend, please visit the following link to view the ceremony: www.Capecoralfirst.org. Funeral arrangements are under the direction of Fort Myers Memorial Gardens Funeral Home, 1589 Colonial Blvd., Fort Myers, FL 33907, 239-936-0555. Online condolences may be offered at: www.fortmyersmemorial.com.

The family of John C. Bacon created this Life Tributes page to make it easy to share your memories.

Send flowers to the Bacon family.