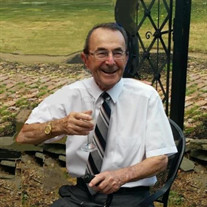 John Feduke of Binghamton, New York and Fort Myers, Florida, age 97, passed away on March 21st, 2022 at his home in Fort Myers of natural causes. He was born to Telka and Dennis Feduke on March 4th, 1925, one of six siblings. He was a member of the United States Marine Corps and a Veteran of World War II. He is predeceased by his wife, Dorothy Feduke, having had a 67 year marriage. John has three surviving sons, Greg Feduke with wife Maya of Binghamton, New York; John Feduke Jr. with wife Debra of Nebo, North Carolina and Michael Feduke of New York City. He is also survived by five grandchildren: Garrett Feduke and wife Erin; Courtney Pierce and husband Brian; Camie Fuller and husband Pete; Natalee Fitzpatrick and husband Stephen and Edward Feduke and wife Guienen. Also surviving are 11 great-grandchildren: Noah; Olivia; Lily Bell; Hixson; Keegan; Kinley; Sophia; Bodhi; Hallie; Henry and Camden. He also leaves behind many wonderful nieces and nephews. In the 1960’s John was involved in the wholesale automobile business and in 1969 purchased his first new car dealership, Gardner Oldsmobile of Binghamton. His sons Greg and John Jr. were involved in the business and over the years three new car dealerships joined the family including franchises with Oldsmobile, Ford, Lincoln Mercury, Mitsubishi, Mercedes-Benz, Volkswagen, Audi and Porsche. Today, the Feduke Ford-Lincoln Dealership on Vestal Parkway maintains the family heritage and is owned and operated by his son Greg Feduke. John enjoyed golfing as his number one sport and favorite hobby. As a snowbird for nearly 40 years, he played nearly every month of the year—summers in Binghamton and the remainder of the year in Fort Myers. His family, friends and neighbors will miss him dearly and remember him fondly as a good, good man with a good heart. In lieu of flowers, the family instead recommends a contribution in honor of John be made to the ongoing relief efforts in the Ukraine by donating to the International Committee of the Red Cross. Donations can quickly and easily be made by visiting their website on the internet at: https://www.icrc.org/en/donate/ukraine Memorial Service arrangements are pending in Binghamton, NY. Local arrangements are private and final care for Mr. Feduke is under the direction of Fort Myers Memorial Gardens Funeral Home, 1589 Colonial Blvd., Fort Myers, FL 33907, 239-936-0555. Online condolences may be offered at: www.fortmyersmemorial.com.

John Feduke of Binghamton, New York and Fort Myers, Florida, age 97, passed away on March 21st, 2022 at his home in Fort Myers of natural causes. He was born to Telka and Dennis Feduke on March 4th, 1925, one of six siblings. He was a member... View Obituary & Service Information

The family of John Feduke created this Life Tributes page to make it easy to share your memories.

Send flowers to the Feduke family.