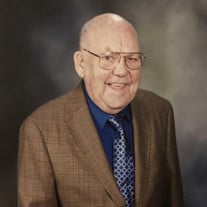 Beloved husband, father, grandfather, and friend, John “Jack” J. Shanahan, age 91, died peacefully in his son’s Florida home on November 13, 2020, surrounded by his family. John was born April 30, 1929, to John and Nellie (Blish) Shanahan of Hillpoint, Wisconsin. He married the love of his life, Monica (Beuten) Shanahan on August 25, 1967. Jack began his career as an ironworker in 1951 until 1973, when he started his own construction business called S & S Erectors, which would later become Shanahan & Son’s Builder’s, Inc. located in South Elgin, IL. Together Jack and Monica raised six children while growing their business, for almost two decades. In 1991, he retired and in 2008, they permanently moved to Fort Myers, Florida where they enjoyed time with each other and visits from their children and grandchildren. Jack was known for being a devoted husband and father as well as an honest businessman, and an entertaining storyteller. In his younger years, he enjoyed family vacations, boating with family on the Mississippi River, and deer hunting with his sons. After the passing of his wife in 2015, he enjoyed traveling to Tennessee to spend time with his children and grandchildren. In recent years, he was still able to enjoy boating, breakfasts with former business friends, and cruises to exotic destinations with Andy and Marci, as well as reminiscing about “days gone by”. He is survived by six children Jeffrey (Cynthia) Shanahan of Elgin, IL; Andrew (Marci) Shanahan of Fort Myers, FL; Elizabeth (Matthew) Hazzard of Orangeville, IL; Lisa (Doug) Ostermeyer of Gilbert, AZ; Timothy (Anne) Shanahan of Franklin, TN; and Howard (Tracy) Shanahan of Thompson’s Station, TN; fourteen grandchildren and nine great-grandchildren. He was predeceased in death by his loving wife, Monica L. (Beuten) Shanahan 7/11/2015, his father John F. Shanahan 2/10/1970, and his mother Nellie Belle (Blish) Shanahan 1951. Visitation and funeral services will be held in Illinois at a later date due to current COVID restrictions.

The family of John Joseph Shanahan created this Life Tributes page to make it easy to share your memories.

Send flowers to the Shanahan family.