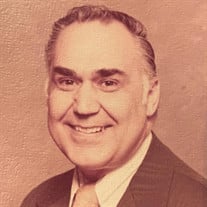 Joseph (Joe) N. Campochiaro, 92, a longtime resident of Lee County, went home to be with the Lord on January 26, 2022, after a brief illness. Joe was born to Guisppe Campochiaro and Catherina Campochiaro in New Haven, Connecticut on August 9, 1929. He graduated from James Hillhouse High School in New Haven, CT in 1946. Joe enrolled in the United States Armed Services, U.S. Navy, September 1946 and was honorably discharged in August 1951. Joe met his lifelong love Amalia (Molly) Magiulo Campochiaro at a barn dance, where as Joe tells the story, Molly landed at his feet, and they married on November 15, 1952. Joe’s faith remained important to him throughout his life. As a young boy, he was an altar server and choir boy. In his adult life, he was ordained an Extraordinary Minister of the Holy Eucharist by ArchBishop John Whealon in Hamden, CT where he also served as a Deacon in the Catholic Church. Upon moving to Florida his involvement and service to the Catholic Church continued as an Eucharistic Minister. He was also instrumental in establishing the Knights of Columbus at St. Andrew Catholic Church, where he served a term as the Grand Knight. Joe was an avid learner throughout his life, his educational accomplishments include but are not limited to the following: a B.S. in Business Administration, a M.S. in Education, and a Sixth-Year Professional Diploma in Public Supervision and Administration. He attended numerous seminars, workshops, and course work during his lifetime. All while working full-time and being a devoted family man. Among Joe’s other accomplishments he held many licenses including those from the New Haven Police Academy, Woodbridge/ FBI School, and Yale University School of Alcohol Studies while living in CT. Upon moving to Florida, Joe became a licensed Real Estate Broker, Insurance Agent, and Private Investigator. He also became involved in local politics and served as a Councilman for the City of Cape Coral. Joe’s educational accomplishments allowed him to serve as a police officer and investigator in Hamden, CT as well as a teacher, administrator, and eventually a college professor. In 1977, he moved with his family to Cape Coral, Florida where he opened his first business, Mister Donut. Eventually, Joe sold this business and was hired as Chief Investigator at the Office of the Public Defender, 20th Circuit, which he retired from in 1993. After retirement, Joe pursued studies in naturopathy and the Southern College of Naturopathy conferred on him the degree of Doctor of Naturopathy in August 1999. The title of a Holistic Health Practitioner, was awarded to Joe by the American Association of Drugless Practitioners in December 1999. This was his passion and he enjoyed helping family and friends, near and far, who called upon his knowledge of alternative medicine. In his spare time, Joe enjoyed working with and training both his dogs who became certified therapy dogs. They enjoyed visiting patients in the hospital and Joe took great comfort in knowing his dogs would brighten a patient’s day. He also volunteered his services with guide dogs at Southeastern Guide Dogs, Inc in Palmetto, Florida. Joe is preceded in death by his parents and his beloved wife, Amalia Campochiaro, as well as his eight sisters and one brother. He leaves behind his daughters, Cynthia Mitar, Joanne Pavese (Frank A. Pavese Jr.) and Linda Buckley all of Fort Myers. He also leaves behind eight grandchildren and two great-grandchildren. The family invites friends to the Mass of Christian Burial, which will be celebrated at 9:00am on Saturday, February 5th, 2022 at St. Cecilia’s Catholic Church, 5632 Sunrise Drive, Fort Myers, Florida, 33919. A private family burial will follow. In lieu of flowers, expressions of sympathy may be made in memory of Joseph N. Campochiaro to St. Cecilia Catholic Church, 5632 Sunrise Drive, Fort Myers, Florida 33919 and/or Southeastern Guide Dogs Inc, 4210 77th Street East, Palmetto, Florida 34221. To view Mr. Campochiaro's Rosary service, please visit the following link: https://www.econdolence.com/join-viewneral?jc=10000:Weq7kbg1q7Ub4p5CTpAHlVNmxBRJod+/:AoIIsxtEBjIoZcdIg0WZBw==:oOyskFIgJDPt6GU/uDLW/Q== To view Mr. Campochiaro's Funeral Mass, please visit the following link: https://www.econdolence.com/join-viewneral?jc=10000:wLq0iDG4zziKd55leN68BPKMtLRyda+m:J3SidbyUlKmUJ4iSYkM/bQ==:dQayWA2YLE919v2bgTC9XQ==

Joseph (Joe) N. Campochiaro, 92, a longtime resident of Lee County, went home to be with the Lord on January 26, 2022, after a brief illness. Joe was born to Guisppe Campochiaro and Catherina Campochiaro in New Haven, Connecticut on August 9,... View Obituary & Service Information

The family of Joseph N. Campochiaro created this Life Tributes page to make it easy to share your memories.

Send flowers to the Campochiaro family.