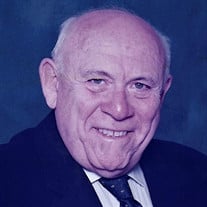 Joseph John Goebel Sr. of Cape Coral, Florida passed away peacefully on Monday, April 5, 2021. He was eighty-eight years old. Joseph was born on November 1, 1932 in West Philadelphia, Pennsylvania, the son of the late George A. and Margaret E. (Nolan) Goebel. Joseph graduated from Saint Thomas More High School (Philadelphia, Pa) after which he served in the United States Army in the Korean War. When he returned from overseas, he entered Plumbers Local #690 Apprentice School and became a plumber. Seven years later, he changed careers becoming a Patrol Officer in the Cheltenham Police Department (Pennsylvania) where he served his community for twenty-five years, the last fourteen as Detective earning numerous awards and commendations. After retiring, he worked eight additional years as the Pennsylvania Chief Juvenile Probation Officers Police Liaison Project Coordinator for the Pennsylvania Commission on Crime and Delinquency before retiring to Cape Coral, Florida with his beloved wife, Patricia Marie Goebel who pre-deceased Joseph in 2015 after fifty-five years of wedded happiness. While serving as a police officer, Joseph also served thirty-five years as a volunteer firefighter with the Elkins Park Fire Company (Pennsylvania) where he held numerous positions including Assistant Chief, Chief, President and member of the Board of Directors. Joseph and his loving wife Patricia raised five children who adored and respected him: Joe Jr. (Karin), John, Mary Ashenfelter (Jim), Richard (Elba) and Ed (Martha). He was also dedicated to his eleven grandchildren and two great-grandsons. He is survived by his sister Elizabeth "Betty" A. Larney of Ellicott City, MD and numerous nieces and nephews and their spouses who always loved “Uncle Joe.” His essence was a man of great faith, devotion and love for his family, his friends, his communities and his Catholic Church. A tireless volunteer in all manner of civic and charitable organizations, Joseph worked on and later became President of Super Saturday, at the time the largest, non-corporate donor to Children’s Hospital of Philadelphia. Later in Cape Coral, he was an active leader in the St. Vincent DePaul Society at St. Andrew Catholic Church. Joseph was a generous, energetic and loyal man to have at your side. He had a larger-than-life personality and he seemed to know everyone in town. He was affectionately referred to as “The Mayor”. Joseph John Goebel Sr. was truly an American hero, a beloved father and a faithful and humble child of God. A viewing for Joseph will be held from 11:00 am – 1:00 pm on Saturday, April 17, 2021 in the Chapel at Fort Myers Memorial Gardens Funeral Home, 1589 Colonial Boulevard, Fort Myers, Florida 33907; (239) 936-0555. A Mass of Christian Burial will be celebrated at St. Andrew Catholic Church, 2628 Del Prado Boulevard, Cape Coral, Florida, 33904 at 1:30 pm on Saturday, April 17, 2021 (239) 574-4545. Upon conclusion of the Funeral Mass, family and friends will travel in procession from the church to his final resting place in the Field of Honor at Fort Myers Memorial Gardens Cemetery, 1589 Colonial Boulevard, Fort Myers, Florida 33907; (239) 936-0555. For those who were unable to attend the Funeral Mass personally, the family invites you to view a recording of the liturgy by clicking the following link:- https://viewneral.zoom.us/rec/play/YQmkPGGvjRQ6YlDQ-fBwMSAPRc03jVbJhnOjLXcvQfycHtdj6ryEG6sjBFaU_bg8EmN6YE94R-47cLkE.t1CNQfHgJXBjzTcb If you were unable to attend the Committal Ceremony at the cemetery, the family invites you to view a recording of the military honors and burial by clicking the following link:- https://viewneral.zoom.us/rec/play/wtzRftApNrsL1Tj_FHjnVA2E62kHKDSlmfrPBw3AdqZ7ihcQjOGf-x0oZ6gV6BljeOV6tbUmM-r3gmWB.mZvSVdcf5LXo7oq_ (Please note, the recordings associated with these links will be available for 30 days following the service and both links will expire on May 17, 2021.) In lieu of flowers or gifts, the family requests that donations be made to the St. Vincent DePaul Society at St. Andrew Catholic Church 2628 Del Prado Boulevard, Cape Coral, Florida, 33904. Those who wish to leave a tribute, share a story or offer condolences to the family at this difficult time are urged to visit Joseph’s memorial webpage at www.fortmyersmemorial.com and sign the guestbook.

Joseph John Goebel Sr. of Cape Coral, Florida passed away peacefully on Monday, April 5, 2021. He was eighty-eight years old. Joseph was born on November 1, 1932 in West Philadelphia, Pennsylvania, the son of the late George A. and Margaret... View Obituary & Service Information

The family of Joseph J. Goebel created this Life Tributes page to make it easy to share your memories.

Send flowers to the Goebel family.