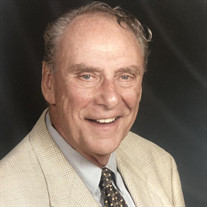 Joseph F. Lancellot, age 88, of Naples, FL and a resident of Delaware County, PA for over 50 years, died on July 2, 2021. He was born in Philadelphia on December 16, 1932 to his parents, Camille and Frances (Sangmeister) Lancellot. Joe proudly served in the United States Air Force. While stationed in Germany, he returned to the USA to marry the love of his life, Patti, on January 3, 1955. He then worked with the Metropolitan Life Insurance Co. and then embarked on a new career with Esso Standard Oil Co. in the early sixties. Having moved to Middletown Township, PA during those years, he remained with this firm (renamed Exxon) as a Marketing Representative until his retirement in 1986. In the early seventies, Mr. Lancellot helped to form the Lenni Heights Civic Association, which began to focus on soon to open Granite Run Mall. He was then elected to the Middletown Township Council and served on several committees. As Chairman of the Roads & Highways, he was instrumental in having the West Knowlton Road wooden bridge rebuilt to the paved road we have today. Joe’s contributions to the Township Council spanned from 1973 – 1981, with the last two years as Chairman. In 1986, he formed a same day delivery company – Sir Lancellot Courier Service, Inc. Having zeroed in on senior citizens as couriers, he was elected to the Pennsylvania Hall of Fame for the work opportunity he provided for this age group. Joe sold the business in 1996 but he and Patti continued to run a contract US Post Office station at their business location until 1997. During these years, Joe was a member of Springhaven Country Club, was both a Eucharistic and Homebound Minister at his church and also a volunteer driver for The American Cancer Society. The Lancellots moved to North Fort Myers, FL in 2002. At St. Therese Catholic Church he was a Eucharistic and Homebound Minister, an Advisory Council member and formed the Men’s Gospel Forum. He also served on the Pine Lakes Country Club Board of Directors. Joe was predeceased by his sister Marie (Lancellot) Michael and granddaughter, Rachel Lancellot. He is survived by his wife of 66 years, Patricia (O’Connor), his sons, Michael (Joanie) and Richard (Joan), daughters, Maureen (Paul Musso) and Lisa (Jeff Ball). His six grandchildren, nieces and nephews were the “apple of his eye.” A Funeral Mass will be held at St. Therese Catholic Church, 20115 N. Tamiami Trail, North Fort Myers, FL 33903 on Monday, July 19 at 11:00 AM. In lieu of flowers, the family is requesting donations in Joseph’s name to be sent to Catholic Charities, 1000 Pinebrook Road, Venice, FL 34285.

Joseph F. Lancellot, age 88, of Naples, FL and a resident of Delaware County, PA for over 50 years, died on July 2, 2021. He was born in Philadelphia on December 16, 1932 to his parents, Camille and Frances (Sangmeister) Lancellot. Joe proudly... View Obituary & Service Information

The family of Joseph F. Lancellot created this Life Tributes page to make it easy to share your memories.