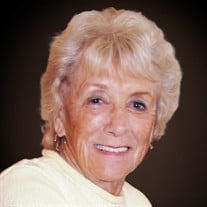 Joyce G. Franzese, a resident of Fort Myers and Cape Coral, FL since 1960, passed away at her home surrounded by her loving family Friday, September 3, 2021. She was born in 1929 in Glasgow, Scotland to the late David and Rachel Howie. Following the end of WW II, her family sailed across the Atlantic and relocated to Brooklyn, New York in 1947, where she soon met the love of her life Frank Franzese. They were married in 1949. Early on, Joyce worked for Western Electric in New York City until the birth of her first child when the family moved to Glen Cove, NY. In 1960, the family relocated to Cape Coral as one of the early residents and, along with her husband, started Franzese Plumbing which is still a family run business today. Joyce's bold spirit and competitive nature was undeniable, striving always to be the best at any undertaking. An avid golfer and a founding member of Cypress Lake Country Club, Joyce enjoyed many years with her golf buddies on the course and in the competitive card games that always followed. She holds the Club record for the most hole-in-ones with eight in her lifetime. Joyce was a woman of many passions, but her love for family was her main focus and greatest joy. As a mother, she exemplified strength, love and dedication in all family matters building a lasting legacy of memories. Her traditional Christmas Eve dinners were cherished by family and close friends. She was preceded in death by her husband, Frank Franzese; her sister, Irene Santos; as well as her brother, Andrew Howie. Joyce is survived by her two loving children, Barry Franzese (Jennifer) of North Fort Myers, FL and Linda Thompson (Ray) of Fort Myers, FL; four grandchildren, Talia Gates, Lesa VanderWerff (Jon), Alexa Chlebek (Robert) and Christopher Franzese; as well as six adored great grandchildren, Carter, Haven, Easton, Aiden, Ryder and Austin. A Funeral Service will be celebrated 11:00 AM, Saturday, September 18, 2021 at Church of the Resurrection of Our Lord, 8121 Cypress Lake Drive, Fort Myers, FL. Interment will follow at Memorial Gardens Cemetery, 1589 Colonial Blvd., Fort Myers, FL. In lieu of flowers, the familly requests that donations be made to the local Hope Hospice or Commumity Cooperative Soup Kitchen. Fort Myers Memorial Gardens Funeral Home has been entrusted with final arrangements.

Joyce G. Franzese, a resident of Fort Myers and Cape Coral, FL since 1960, passed away at her home surrounded by her loving family Friday, September 3, 2021. She was born in 1929 in Glasgow, Scotland to the late David and Rachel Howie. Following... View Obituary & Service Information

The family of Joyce G. Franzese created this Life Tributes page to make it easy to share your memories.