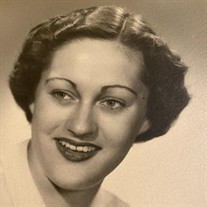 On March 22, 2021, an enthusiastic Buckeye fan, loving wife, and devoted mother, Katharine (Kathie) Hyre, was welcomed into God’s Kingdom. Kathie was born Katharine Mason Snyder on January 24, 1929, in Piqua, Ohio. She was the only child of Andrew and Katharine Snyder, and grew up in Piqua, where she showed early signs of interest in sports, entertaining, and music.   As a child, she regularly attended Cincinnati Reds baseball games and boxing matches with her father. Many years later, Kathie could be found, on any given summer day, going about her daily routine with the Reds baseball games playing on the radio in the background. After attending The Ohio State University, her fan status included Buckeye football and basketball. Even into her nineties, Kathie expressed concern that on a football Saturday, neighbors would hear her yelling and think she was under attack!   In Junior High, her social and hostess skills began to shine. Kathie and her friends started a social club, which they dubbed the “Pi Hi sorority.” Kathie hosted the meetings at her house, and the girls briefly published an underground “scandal sheet” (until the Principal put an end to it). Several of those original club members eventually were Kathie’s bridesmaids and ended up as lifelong friends. Getting a taste for entertaining and a chance to flex her organizational skills at an early age served Kathie well her entire life. She was elected vice president and then president of Alpha Xi Delta sorority. Later, Kathie had many opportunities to entertain as a military wife and a swim mom, and she earned her reputation as an extraordinary cook. She truly enjoyed hosting OSU tailgate parties where both of her passions were on display.   Kathie enrolled in piano and voice lessons as a child and ultimately majored in music education at Ohio State University. With her education degree in hand, she taught music in Urbana, Ohio as a new college graduate. Soon after starting work, she married her college love Frederick (Fred) Hyre of Delaware, Ohio. She met Fred when they were both Seniors at OSU taking the same education class. Little did Kathie know, but Fred was smitten with her. He called her sorority house, and after some initial confusion about exactly which Kathie he was interested in, he asked her out on a date. A date became a courtship, a marriage, and a lifetime partnership. Kathie and Fred married on August 9, 1952. In 1953, Fred was commissioned a 2ndLieutenant in the Air Force. Thus began a 28-year military career, which involved 17 moves and included four overseas tours. Kathie, the small-town western Ohio girl, lived in France, Okinawa, Japan, Thailand, and many different states.   Entertaining, music, and sports aside, Kathie’s biggest love was her family. Along the way, Kathie and Fred welcomed three sons into the world. In each location, Kathie was the glue that held the family together. With ease, she made holidays and birthdays special, drove in endless carpools, attended countless kids’ sporting events, and made untold dozens of cookies for bake sales, all while supporting Fred’s military career.   After Fred retired from the USAF, Kathie and Fred became Florida snowbirds. During the summer months, they worked on the Delaware, Ohio family farm, managed a farm stand, and eventually worked with their middle son, Eric, at The Grove, a gourmet farm market. In 2001, Kathie and Fred moved to Florida full-time, and Kathie remained active, serving on various boards and committees in her community.   Kathie is survived by her husband Fred, her three sons, David (Barbara), Eric, and Randal (Anne), her three grandchildren, Katharine, Asher, Elena, and countless friends worldwide. A Memorial Service has been planned for 1:00 PM, Saturday, April 10, 2021, at the Brandywine Room, 1293 Medinah Drive, Ft. Myers (for Covid social distancing reason we are requesting an RSVP). A private interment service is planned. In lieu of flowers, the family has requested that donations be made to the Ohio State University chapter of Alpha Xi Delta (https://psi-alphaxidelta.2stayconnected.com/donate-here) or to the Brandywine Memorial Garden Fund (please make checks payable to the Brandywine Activities Committee).

On March 22, 2021, an enthusiastic Buckeye fan, loving wife, and devoted mother, Katharine (Kathie) Hyre, was welcomed into God&#8217;s Kingdom. Kathie was born Katharine Mason Snyder on January 24, 1929, in Piqua, Ohio. She was the only child... View Obituary & Service Information

The family of Katharine "Kathie" Snyder Hyre created this Life Tributes page to make it easy to share your memories.

Send flowers to the Hyre family.