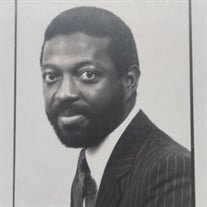 Sunrise: July 15, 1940 Sunset: December 7, 2020 Larry A. Barton was a man of integrity and discipline. When his wife, Phyllis, met him at the City College of New York (CCNY), in 1962 he was very focused on getting good grades, graduating with a degree in Biology, and doing research at Albert Einstein School of Medicine. He contributed to a medical journal and had his name appear as a contributor on the document. However, due to limited grants in research at that time, Larry’s future in research was short lived. Subsequently, IBM made an offer to hire him. After months of intensive training, Larry accepted a position as a programmer at IBM. He retired after climbing the ladder of success for almost 25 years at IBM as an Executive Manager in White Plains, NY. In the 1980’s -1990’s, his dedication to uplifting and supporting minority causes was demonstrated when he orchestrated employees’ payroll deductions in ATT and IBM in New York. Many knew of his dedication as a civic influencer when he accepted the Vice President’s position at the non-for-profit organization, Black United Fund in New York. He remained in that position until the move to Florida in 2004. He served as a legal researcher when he assisted a number of housing entities with the current housing laws. His latest endeavor, in conjunction with others, was writing a book on the history and contributions of the Black United Fund of New York. His deliverance was always clear, concise, and logical. In Cape Coral, Florida he joined a group of political advocates who rallied behind local enthusiasts and challenged the financial costs for the installation process to provide city water to Cape Coral residents. His contribution, as a guest opinion writer for the News Press for a couple of years, was regarded as a positive force in that he provided a convincing alternative opinion. On the personal side, he was a loyal friend, an exemplary father, and exceptional husband. Larry’s manner was relaxed, honest, and assured. He was a man of his word. Once committed to a project, he followed through with details and efficiency. Larry was born in South Carolina to Frances Wright and William Turner Barton, but was raised in New York from the age of nine months. Larry is survived by his wife of 47 years, Phyllis; his son, Khari; sisters-in-law, Sandie and Jackie; brother-in-law Victor, and a host of cousins and friends in New York, South Carolina, and Florida. God bless Larry and may he rest in peace. Amen.

Sunrise: July 15, 1940 Sunset: December 7, 2020 Larry A. Barton was a man of integrity and discipline. When his wife, Phyllis, met him at the City College of New York (CCNY), in 1962 he was very focused on getting good grades, graduating with... View Obituary & Service Information

The family of Larry Alfred Barton created this Life Tributes page to make it easy to share your memories.