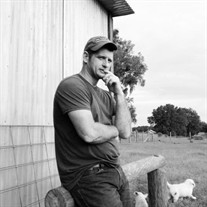 Larry Robinson Shuman, 47, of Fort Myers, Florida, returned home to his Heavenly Father following a motorcycle accident on November 17, 2020. Larry was born to Hanford Blitch Shuman Jr. and Jeannine Robinson Shuman on September 19, 1973 in Miami, Florida. It was a joyful day when Larry completed his family as the tenth child, joining his 7 sisters and 2 brothers. Larry was a member of The Church of Jesus Christ of Latter-day Saints and had a testimony of Jesus Christ and believed that families can be together forever. In the early eighties the family moved to Ocala, Florida where they established a beautiful home and horse farm. Larry attended North Marion High School in Ocala and during his high school days he loved working the farm with his dad and riding horses. Larry loved a hard day’s work and up until his death, he had a work ethic that showed in his talent for building roads and getting a job done with excellence. He was driven to be precise and show as much perfection in his work as possible. Larry was proud of his children and their many talents. Each of them cherished working alongside their father and learning from him. His oldest son was doing just that, working alongside his father and learning the skill of heavy equipment operation, mining, and road construction. All of his children gained a work ethic like their father. Larry made everyone feel unique and prized in his or her own way. He lived by a script that placed others before him. Larry was a giant among men. Once you met him, you never forgot him. His humor and imitations would have everyone in stitches. Whether dancing, imitating others, or telling bear hunting stories, he would draw you in and then leave you on the ground laughing in tears! He absorbed everything fun, beautiful and challenging around him. Larry recently had an amazing trip to Alaska with his brothers and of course, Larry had to take the polar plunge. In his own words he said, “If you go to a dance, dance!” and, "If you go to an incredible place, do the thing! Do it.” That was him. That’s how he lived. Larry married Kristin McGrath July 12, 1997. The greatest blessing that came from their marriage was their daughter Ali. They later divorced. On March 3, 2003 Larry married Brandy Baxley and gained a stepdaughter, Rayne. Together they were blessed with 4 more children. He is survived by his wife Brandy Baxley Shuman and his children Ali 22, Rayne 21, Judge 19, Lily 16, Doc 12, and Sadie 10. He is also survived by his parents Hanford Blitch Shuman Jr. and Jeannine Robinson Shuman and his siblings Rhonda, Deborah, Gale (Ronald) Brackin, Elizabeth (Jeffery) Mack, Brienne (Guillermo) Herrera, Hanford Blitch III (Kelly), Wesley (Caralee), Audra (Kendall) Misak, and Kimberly (Shawn) Henderson and an adoring extended family. Larry will be laid to rest in the San Mateo Cemetery, San Mateo, Florida. #ShumanStrong #TheLordLovesaWorkinMan

The family of Larry Robinson Shuman created this Life Tributes page to make it easy to share your memories.

Send flowers to the Shuman family.