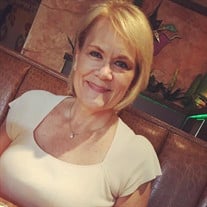 Mrs. Laurene Mary Yeager, age 65 of Cape Coral entered this life on October 17, 1956, in Glenview, IL where she lived for 18 years. Laurie was ambitious from a very young age. She was a 1975 graduate of Regina Dominican High School. After High School, Laurie then moved to Lexington, KY with her childhood best friend, Pam Peter, and joined the Kappa Kappa Gamma Sorority house at the University of Kentucky. In 1979 Laurie graduated with her bachelor’s degree in Business. After college, in the early 80’s she met her soulmate, Jeff who she then went on to marry in 1982. The two were inseparable, late-night movies and dinners were some of their favorite things. Laurie then settled down in her career, where she spent 30+ years in the Mortgage industry as a Branch and Area Manger. Laurie’s favorite day was spent shopping or traveling with her husband and two daughters, horseback riding or being on the water. Laurie’s outer beauty was obvious, but she also had a beautiful heart and led with compassion and grace throughout her life. Laurie passed away Thursday, March 31, 2022, at 7:46 pm under the care of Hope Hospice. She adored her loved ones and was immensely proud of the family she helped build. Laurie was preceded in death by her husband Jeff Yeager, father Carl Enberg, and brother, Wayne Enberg. She will be missed by her loving daughters, Alyssa Yeager-Nieves (Richard) of Cape Coral, FL and Kimmie Zeller (Brian) of Cape Coral, FL; three beautiful grandchildren, Elliot Rose, Porter Lily, and Jeffrey James; her mother, Audrey Enberg of Fort Myers, FL; one brother, Dennis Enberg (Dondria) of Glenview, IL; as well as many nieces, nephews, extended family members, and friends. A Celebration of Life will be held 11:00 AM, May 7, 2022 at Grace Church, 13 SE 21st Place, Cape Coral, FL. In lieu of flowers, memorial contributions may be made, in loving memory of Laurie Yeager to: Alzheimer’s Association - Florida Gulf Coast Chapter 9240 Bonita Beach Road, SE #1101 Bonita Spring, FL 34135 Website: https://www.alz.org/flgulfcoast?set=1

Mrs. Laurene Mary Yeager, age 65 of Cape Coral entered this life on October 17, 1956, in Glenview, IL where she lived for 18 years. Laurie was ambitious from a very young age. She was a 1975 graduate of Regina Dominican High School. After High... View Obituary & Service Information

The family of Laurene Mary Yeager created this Life Tributes page to make it easy to share your memories.

Send flowers to the Yeager family.