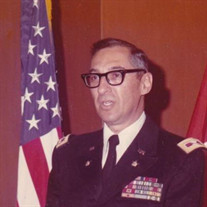 Colonel Lee Martin Sherman, Ph. D passed away in Cape Coral, Florida on December 4, 2021 at the age of 97. Lee, an Easterwood Park boy born in Baltimore on October 7, 1924, was the elder son of famed Baltimore news dealer and World War I and II veteran Abe Sherman and his wife Ann (Fried) Sherman. He graduated from Baltimore City College in 1942 and then volunteered for the US Army. He was selected to train with the XVIII Airborne Corps to make stealth glider landings on the Japanese mainland, however before training was complete, the atom bomb was dropped and WWII was over. Lee was promoted to Master Sergeant and given a Presidential appointment as a 2nd Lieutenant. He received a B.A. from the University of Maryland in 1950 and was assigned to Korea. In Korea he saw action with the Far East Command; a secret organization consisting of all Intelligence and Guerrilla Operations. Lee was then appointed as Aide de Camp to its Commanding General. Lee was promoted to Captain and became Commanding Officer of Company D, 502nd Airborne Division. He later served as Assistant Professor of the Military Sciences at Ohio University, Athens. In 1960, he was assigned to White Sands Missile Range, New Mexico as an Assistant Operations Officer and later made Commanding Officer of Detachment 2. Upon his promotion to Major, he became a student at the Command and General Staff School. After graduation, he was assigned as the Commander of the Support Division J2 (Intelligence) in Washington, DC. Lee served in Vietnam as Executive Officer for the J2 Intelligence Office. He was promoted to Lieutenant Colonel and worked at The Pentagon, until assigned as Program Director of the Army’s first Research and Development for Weapons service in Bangkok. After Thailand, Lee earned a Doctor of Business Administration Degree from George Washington University and was promoted to full Colonel. He became Chief of Research Development and Engineering of the US Armament Material Command at Rock Island Arsenal. There he was awarded the Legion of Merit, one of 16 decorations he earned during his 33 years of military service. Among his many decorations were the Soldier's Medal for heroism and 2 Bronze Stars. He was also awarded the Department of Defense Assignment Badge, and The South Korean Hwarang Medal with Silver Star. Colonel Sherman retired from active service in 1976 and, as civilian Dr. Sherman, taught for the next 16 years as Associate Professor of Management and Marketing at the University of North Carolina at Wilmington. In his spare time, he enjoyed boating, fishing, reading, military history, and collecting stamps. At each posting, he was an active member of the local Jewish community and held many synagogue leadership positions. Services were private; and Colonel Sherman was laid to rest at the Field of Honor located within Memorial Gardens Cemetery, 1589 Colonial Boulevard, Fort Myers, Florida 33907, (239) 936-0555. Full military honors will follow at the cemetery on January 8, 2022 at 11am; for those unable to attend the Memorial please join via Live Stream link before: Please click the following link to join: When: Jan 08, 2022 10:45 AM Eastern Time (US and Canada) Viewneral Service Name: In Loving Memory of Colonel Lee Martin Sherman, Ph. D Please click the following link to join: https://www.econdolence.com/join-viewneral?jc=10000:+p60oUiHVRttDx8VjpzaMnh8NTM+fWsA:uIR3gBZb+lnoI6gzcT1pGw==:/fMR4IpAFB02/F1D23DFew== Viewneral ID: 935 9911 2812 Password: 101819 He is survived by his beloved daughter, Julie (Scott) Dube', four grandchildren, David Dube', Christopher Dube', Joshua Mendoza, and Jessica Tan, and five great-grandchildren. He was a devoted uncle to niece Lynne Sherman Lyon and nephew Mark Lawrence Sherman and their extended families. Lee’s wives, the former Bunny Sherman and Frances Stevens, and his daughter Renee Jones predeceased him, as did his brother and sister-in-law, Baltimore attorney Brigadier General Philip (Helene) Sherman. To share a story or photo, leave a tribute or to offer condolences to the family at this difficult time please viit Colonel Sherman's memorial webpage at www.fortmyersmemorial.com and sign his guestbook.

Colonel Lee Martin Sherman, Ph. D passed away in Cape Coral, Florida on December 4, 2021 at the age of 97. Lee, an Easterwood Park boy born in Baltimore on October 7, 1924, was the elder son of famed Baltimore news dealer and World War I and... View Obituary & Service Information

The family of Colonel Lee Martin Sherman, Ph. D created this Life Tributes page to make it easy to share your memories.