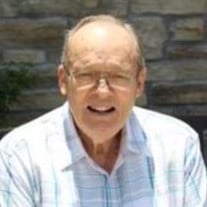 Lyle went home to be with the Lord on February 9, 2021. Lyle was born in Livingston Co, Illinois to Donald and Gladys (Lower) Clover. Lyle married Betty (Lee) Clover on May 23, 1953. They celebrated 67 years of marriage on May 23, 2020. Lyle was a well know pork producer in Ionia, Michigan and resided many years on Stage Road at Clover’s Ham-let. Lyle was a recipient of many awards, was an Outstanding Young Farmer and a member of Kellogg Farmer’s Study Group at MSU. He was a 4-H leader and a member of the Michigan Pork Producers and was recognized in many farm magazines for his ability to grow corn and soybeans and for pork production. Lyle was also a member of the Board of Education for Ionia Public Schools. Lyle was a private pilot, and loved flying most of all. He retired to LeHigh Acres, Florida, where he took up woodworking. He made his own casket using wood from the farm and many gifts for his children and grandchildren, the church and friends. He was a member of New Life Assembly of God Churchwhere he was a Royal Rangers Leader and usher. Lyle is survived by his wife Betty, daughters Debra (Garett) Smith and Renee (Steve) Jachim of Lafayette, IN and sons Greg (Cathy) Clover, of Rockford, MI, JP (Lori) Clover, Ionia, MI and Brent (Deb) Clover of Naples, FL. Two brothers, James Clover of Ionia, MI and Duane Clover of Bronson MI and sister, Lorraine Sygnecki of Bronson, MI. Lyle was preceded in death by his parents and son-in-law Michael Winger. A celebration of Lyle’s life will be held on February 16, 2021 at 11:00 at Shiloh Community Church, 8197 Heth St, Orleans, MI with internment in Oakwood Cemetery in Muir, MI., with visitation preceding at 10:00. Any who would like to is invited to a luncheon after interment at Clover Family Farms, 2412 Stage Road, Ionia, MI. A Celebration of Life will also be held at New Life Assembly in Fl on March 8, 2021, time to be determined. Since Lyle was an international traveler, memorial contributions may be made to New Life Assembly Church, 5146 Leonard Blvd S, Lehigh Acres, FL 33973 for Bibles translated into other languages, called Fire Bibles.

Lyle went home to be with the Lord on February 9, 2021. Lyle was born in Livingston Co, Illinois to Donald and Gladys (Lower) Clover. Lyle married Betty (Lee) Clover on May 23, 1953. They celebrated 67 years of marriage on May 23, 2020. Lyle... View Obituary & Service Information

The family of Lyle Leroy Clover created this Life Tributes page to make it easy to share your memories.

Send flowers to the Clover family.