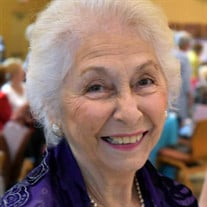 Maria Mercedes Sarracino (nee Conde) Aug. 7, 1931 - Nov. 12, 2021 Maria Sarracino, age 90, beloved, Mother, Grandmother, Great-Grandmother, Wife, Sister and Friend, joined the Church Triumphant Friday, Nov. 12, 2021, passing peacefully into the next realm with her family nearby. Born in Bahia Honda, Pinar del Rio province, Cuba, she was a child of the Great Depression. She was raised in a small, rural village, where at the age of 16 she married her childhood sweetheart, Oscar Sarracino (1929-2009), with whom who she built a life over the course of their more than 60 year marriage. Shortly after their vows, they were blessed with a daughter, Diana Jenkins, followed two short years later by another daughter, Laura Taylor. In the mid-1950s, the family emigrated to the U.S. and, like so many other Cuban emigres settled in Miami. Not long after their arrival, the family added a new member, Oscar Joseph Sarracino (1956-2004). And after a brief stay in Miami, the five Sarracinos migrated north to Port Chester, N.Y., where the clan grew once again with the birth of their fourth child, Raymond Peter Sarracino. Maria was a loving mother and became known as a welcoming friend to all. At the time, Port Chester was an industrial area on the Byram River, and Maria worked at several of the factories and packing plants that dotted the riverfront. She was an industrious worker and was revered for her dependability. In the 1970s, the family moved once again, this time to the suburbs of Washington, D.C. where she found abundant opportunities for employment and found her lifelong professional passion -- customer relations. She was employed at several retail outlets before culminating her professional career as a bank teller, retiring from banking in the late 1990s. Throughout her life her passion was her family and friends, with sewing not far behind. She did her best to ensure her family was happy, including serving as a volunteer in the Cub Scouts, (National Capital Area Council’s “Scouter of the Year” two years in a row). She was an avid seamstress and possessed great talent at making women's fashions from scratch, often simply by site, without the aid of plans or patterns. Known throughout the community as someone who welcomed all to her table, her home was often populated with a nonstop series of her children's friends, as well as her own friends, neighbors and family. Maria is survived by her daughters, Diana Jenkins of Fort Myers, Florida, Laura Taylor of Whidbey Island, Washington, son Raymond Sarracino of Fort Myers, Grandchildren, Alisha Taylor of Seattle, Washington, Will Jenkins of Bellingham, Washington, Michael Sarracino of San Luis Obispo, California, Joseph Sarracino of Fort Myers and Great-Grandson, Matteo Bishop of Seattle. While her loss leaves a void in our hearts, her legacy of love, kindness, and quite possibly the world's warmest smile and infectious laugh, will always live in the hearts of those of us who loved her. A memorial service is scheduled for Saturday, December 18, 2021 at 11 a.m. at Gateway Trinity Lutheran Church, 11381 Gateway Blvd., Fort Myers, Florida

The family of Maria Mercedes Sarracino created this Life Tributes page to make it easy to share your memories.

Send flowers to the Sarracino family.