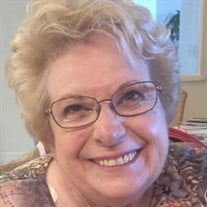 Marilyn (Lynn) Paula Klimara passed away peacefully on August 8, 2021. Lynn was born in Chicago to Philip and Cecelia Dore, the fourth of five children. Lynn attended St. Bernard’s School of Nursing and met her loving husband of 56 years, Ronald (Ron) J. Klimara at a Lewis College/St. Bernard’s school dance. They were married at St. Nicholas of Tolentine Catholic Church in Chicago. After having their two children, they relocated to Monticello, Indiana where they became parishioners at Our Lady of The Lakes Catholic Church. You can take the person out of Chicago, but you cannot take the Chicago out of the person, and Lynn was no exception. Lynn was never afraid to tell you what she thought, had a great sense of humor and was quick with a laugh. She was drawn to the field of nursing and was passionate about delivering quality care to her patients during the course of her career. Much of Lynn’s free time was focused on her strong Catholic faith including becoming a lay minister, eucharistic minister, teaching catechism, serving as a lector and trips to the Holy Land. Lynn was very involved with the local Prayer Line which she continued throughout her life. She was a voracious reader, including religious books, and said the rosary daily. She loved spending time with Ron, their children and grandchildren at their house on Sanibel and loved sharing stories, but alas, would never have a career as a fact checker. She faced many health challenges over the past three decades and met them all with courage, dignity and determination and humbly credited the Virgin Mother for her many victories. She and Ron retired to Sanibel Island and then Fort Myers, Florida and resided there for the past 30 years where Lynn liked to spend time with Ron, collect shells, enjoyed spending time with her children and grandchildren on their frequent trips, enjoyed the library, enjoyed watching beautiful sunsets from the beach and rarely passed up a good cheeseburger. Lynn is survived by her loving husband Ron, her two children, Colleen and Kevin (Angelique) and her two grandchildren, Miles (Kate) and Kelsey. Lynn is also survived by her brother Philip Dore and Roger Dore, and was preceded in death by her parents and brothers Rev. James Dore and Daniel Dore. A funeral mass will be held at 11:00 am Friday, August 20 at St. Columbkille Catholic Church, 12171 Iona Rd., Fort Myers, FL. In lieu of flowers, a memorial donation may be made to: Servants of Mary at 1439 Harlem Ave., Berwyn, IL 60402.

The family of Marilyn P. Klimara created this Life Tributes page to make it easy to share your memories.

Send flowers to the Klimara family.