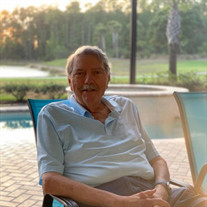 Michael Joseph Hagan, aka “Big Mike”, was born on December 23, 1945, the cherished son of Eleanor Silk Hagan and Michael Hagan, Manhattan, NY. He lost his valiant battle on January 1, 2022. He is survived by his wife of 49 years, Carol Jean Hagan of Fort Myers, Florida, his daughter Heather Jean Hagan of Charlotte, NC and his son Michael Kevin Hagan (fiancé Colleen) of New York City, NY; his sisters Barbara Gambino (Richard) and Patricia Weiner (Jack) both of New York City, NY, plus numerous adoring nephews, nieces, grandnephews, grandnieces, and lifelong friends, all entertained by his joking and loving presence. He grew up in Manhattan and spent many days at the Kips Bay Boys Club, he attended Our Lady of Perpetual Help Elementary School and St. Agnes High School and later went on to attend Hunter College. In 1966, he was drafted into the United States Army and served in the Vietnam War. On his return from the service, Mike moved back to New York City and began his career at Citibank, where he met the love of his life, Carol Bermudez and they started their family. Mike’s career took him and his family to Miami, Florida, Dublin, Ireland, United Kingdom, and Houston, TX to name a few places; they eventually moved to East Brunswick, NJ, where they raised their children. Mike was especially proud of his beautiful home, deck and huge backyard that he provided for his wife and children. He enjoyed many an evening in the “outdoor theatre” on his deck with a good stogie and a book. Always true to his Irish heritage, Mike had a knack for telling stories of the old days in New York City with his Kips Bay crew. He had a gift for welcoming anyone around him with a story about when he visited where they were from, saying “hi, how are you” (in 40+ languages), or knowing the capital of every country in the world to acknowledge something about the person he was talking to (including every cabbie in NYC)! Mike loved to sing and often serenaded friends and family with renditions of Irish tunes. Mike had a gift with numbers and took pride in being able to do any math equation in his head. He read the Wall Street Journal cover to cover until weeks before his passing, he was a virtual authority on current events around the world. He loved having “debates” with his daughter on the most important or mundane topics and although they wouldn’t see eye to eye all the time, they would always belly laugh with each other. Mike was an avid golfer and enjoyed many a round with his pal, Michael, his good friends from Forsgate Country Club and was welcomed by the “Hatchlings” in 2013 at his new club, Pelican Preserve Golf and Country Club. The most important part of Mike’s life before his wife and children came along, was growing up close to his dear cousins and the Kips Bay boys crew which became his lifelong best friends. These men were like his “brothers” and remained so for over 60 years. They will miss his stories and treasure their memories with him for years to come. Big Mike was a legend amongst his family, friends, and friends of his children. Ever an Irish laddie, he made many feel like an extended part of the Hagan family with his unique wit and charm and even adding “Hagan” as a hyphen to many of their last names. He will lovingly be remembered for his humor, generosity of spirit, and unique ability to have a story for everything. His beautiful smile will continue to light up our memories as it lit up any room he walked into throughout his life. Thanks be to God for the life of Michael Joseph Hagan. A visitation will be held from 1:00 - 3:00 PM and 6:00 - 8:00 PM, Wednesday, January 12, 2022 at Fort Myers Memorial Gardens Funeral Home, 1589 Colonial Blvd., Fort Myers, FL 33907. A Mass of Christian Burial will be celebrated 10:00 AM, Thursday, January 13, 2022 at St. John XXIII Catholic Church, 13060 Palomino Lane, Fort Myers, FL 33912. Interment will follow at Memorial Gardens Cemetery, Fort Myers, FL. Reception to follow at Pelican Preserve Golf and Country Club. In lieu of flowers, the family has asked for donations to be made to the Kips Bay Boys and Girls Club or Tunnels to Towers in Mike’s name. A memorial service is also planned for the spring in New York City.

The family of Michael Joseph Hagan created this Life Tributes page to make it easy to share your memories.