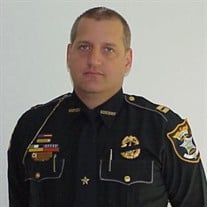 Michael Lee Waite was born in Miami, Florida on Wednesday, October 7, 1959 to Gerald and Rose Marie Waite. Michael went to school in Miami until the family moved to Fort Myers in 1974 where he went on to graduate from Cypress Lake High School. Shortly after graduating, Michael married, moved to Orlando, and had two children. His true love, Beverly, came along a few years later. He joined the Lee County Sheriff’s Office in 1981, where he rose in rank to Colonel. He was a beloved member of the LCSO for 28 years until his retirement in 2009. Michael was a motorcycle and camping enthusiast. He and Beverly spent many fun hours traveling and enjoying the great outdoors. He was also a devoted member of the McGregor Baptist Church directing and teaching/training the Volunteer Security Team for many years. Michael leaves behind his mother, Rose Marie, beloved wife Beverly, their sons Tom (Edie) and their children, Andrew and Brynna; James (Jessi), and their children, Avery and Tanner; and his sons from a previous marriage, Austin (Teala) and their children, MacKenzie and Hailey; Brad (Crystal) and their children, Veronica and Jackson. He also leaves his sisters, Donna Terwilliger (Gary) and their children Joshua and Stacie and Linda and her daughters, Caitlin and Maggie, and her grandson Flynn. In lieu of flowers, donations can be made to McGregor Baptist Church, 3750 Colonial Blvd., Ft. Myers, Florida, 33966. A Visitation for Michael will be conducted from 12:00 Noon until the beginning of his Funeral Service at 1:00 PM on Wednesday, March 23, 2022 inside the Sanctuary at McGregor Baptist Church, 3750 Colonial Boulevard, Fort Myers, Florida 33966, (239) 936-1754. An Honor Guard in recognition of Michael's many years of service to the citizens of Lee County will be provided during the entirety of these End of Watch Ceremonies by the Lee County Sheriff's Office. To share a story or photo, leave a tribute or to offer condolences to the family at this difficult time. please visit Michael's memorial webpage at www.fortmyersmemorial.com and sign his guestbook.

Michael Lee Waite was born in Miami, Florida on Wednesday, October 7, 1959 to Gerald and Rose Marie Waite. Michael went to school in Miami until the family moved to Fort Myers in 1974 where he went on to graduate from Cypress Lake High School. Shortly... View Obituary & Service Information

The family of Michael Lee Waite created this Life Tributes page to make it easy to share your memories.

Send flowers to the Waite family.