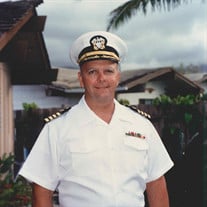 On July 7th 2021, Captain Oscar Lee “Rip” Coston Jr., CEC, USN (Ret.), reported for final duty and eternal rest in God’s Kingdom. He was born in Birmingham, Alabama on March 3rd 1942, to Oscar and Madge Coston. He graduated from Ensley High School (AL) in 1960, then from Auburn University (AL) with a BS in Civil Engineering in 1964, continuing to The Leland Stanford Junior University (CA) with a Master of Science in 1973 and finally from Salve Regina College (RI) with a Master of Arts in 1984. He was honored to attend the Naval War College in Newport (RI). He married his high school sweetheart, Lindal Pearl Fletcher, also from Birmingham, on August 25th, 1964. The very next day, he and Lindal embarked on a wonderful journey courtesy of the United States Navy. As part of the U.S. Navy Civil Engineer Corps, they traveled the world with tours in Port Hueneme (CA), Madrid (Spain), Cecil Field (FL), MCB-71 “Seabees” in Davisville (RI) and Guantanamo Bay (Cuba), Palo Alto (CA), Adak (AK), the US Army in Leesville (LA), Catania (Sicily, Italy), Newport (RI), Honolulu (HI), and New Orleans (LA), where he retired in 1991. He was the recipient of several awards and citations, including the Defense Superior Service Medal. His post-Navy employment saw him continue his career in construction management. He worked at Walk Haydel & Associates, an engineering firm in New Orleans (LA) and retired a second time from East Jefferson General Hospital (LA) as the Director of Facilities. After his second retirement, Rip and Lindal relocated to Cape Coral and spent 11 years together in southwest Florida. He was an avid golfer who was proud of having two awards for getting a “hole in one” (LA and FL). Rip was a loving, supportive husband to his wife Lindal and a wonderful father, role-model, and mentor to his two sons, Randall and Timothy. He is survived by his wife of 56 years, Lindal (FL), his son, Randall, daughter-in-law Brita and grandson Kai (Cayman Islands); son Timothy (CA/FL); brother William “Buddy”, sister-in-law Barbara (OH); as well as nieces, nephews, cousins, extended family members and friends around the world. A Funeral Service will be celebrated 4:00 PM, Saturday, July 17, 2021 at Fort Myers Memorial Gardens Funeral Home, 1589 Colonial Blvd., Fort Myers, FL 33907. The family will receive friends for a time of visitation from 3:00 PM until the service time at the funeral home. For those unable to attend the services you may view the recording by clicking the link below. https://viewneral.zoom.us/rec/play/D1ONhc_CGTjF-maSuehksqLfy-muItHTiQbGYHI2Wso33OiknhsmlB2XkbvKrgTWLszCPpGlNbqBN6TO.s7x8WoDme1MmIUCl In lieu of flowers, memorial contributions may be made in loving memory of Oscar "Rip" Coston to the First Baptist Church of Cape Coral (4117 Coronado Parkway, Cape Coral, FL 33904), Hope Hospice (9470 Healthpark Circle, Fort Myers, FL 33908), or to the Florida Cancer Specialist Foundation (www.fcsf.org).

The family of Oscar Lee "Rip" Coston Jr. created this Life Tributes page to make it easy to share your memories.