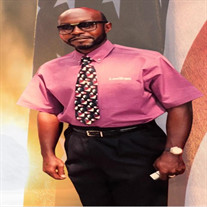 Oscar Lee Williams was born on November 21,1950 in Montezuma, GA to the late Elizabeth Lewis Allen and Arkie Williams, Sr. Oscar was educated in the public school system in Macon County, GA in his early years and then moved to New York at the age of 14 where he resided with his sister, Betty Williams, and her children. While in New York, Oscar was a cook at George’s Soul Food Restaurant on Washington Ave and Bergen St in Brooklyn, NY for several years. Oscar was a Veteran who proudly served in the US Army as a Sergeant E5 from 1978 to 1992. He received several Army Achievement Medals and Army Commendation Medals during his years of service before he was Honorably Discharged and retired in 1992. He earned the nickname “Kool Daddy” while in the military due to his dress and demeanor. After retirement from the US Army in 1992, Oscar moved to Fort Myers, FL. He married the love of his life, Louise Nelson, on June 19, 1992. He became employed with Lee Tran in 1992 until he retired in 2017 where he received many accolades as well. He was well loved by his co-workers, supervisors, and passengers on his bus routes. Oscar loved cars, money, clothes, shoes, hats, doo rags, lemons, butterscotch candy, and Christian Brothers brandy. Whenever he appeared, it was time to “Moochie” or be prepared to do some push-ups if you didn’t do it nor if you didn’t do it correctly. He was also known for his “Cha Cha Cha”, a dance he created and perfected. He was the “Nickname Connoisseur.” If there was a nickname that he wanted you to have, he had no problem giving it to you. Two of his most memorable quotes were, “You crawl before you walk, walk before you run and run before you fly,” and “There are 2 ways to do things in life: sensibly and foolishly.” Oscar was preceded in death by his father, Arkie Williams, Sr.; mother, Elizabeth Lewis Allen; brothers, Marvin Thomas and Arkie Williams, Jr.; sisters, Bertha Ruth Strong, Georgia Mae Rumph and Betty Williams. Oscar leaves to cherish his memories: a devoted wife, Louise Nelson Williams of Fort Myers, FL; daughter, Tia L. Williams (Lee) of Dunn, NC; stepdaughter, Anitra Rice (Paul) of Fort Myers, FL; stepson, Herbert Nelson (Sharon) of Fort Myers, FL; grandchildren, Kiasha Church, Kida’sha Church, Walter Thornton III (Nardos), all of Fort Myers, FL, Tyra Sturgis of Tampa, FL and Giovanni Pascal of Fort Valley, GA and bonus granddaughter, Quadeysia Castaneda of New York; great-grandchildren, Courtney Parchman, Jr., Ryan Campbell, Kason Parchman and Zariya Thornton; special friends, Robert Barner, Sr. and Leon Joseph along with a host of many relatives and friends. “Come to me, all you who are weary and burdened, and I will give you rest.” (Matthew 11:28) A visitation will be held from 6:30 - 8:00 PM, Friday, January 28, 2022 at Fort Myers Memorial Gardens Funeral Home, 1589 Colonial Blvd., Fort Myers, FL 33907. A Funeral Service will be celebrated 10:00 AM, Saturday, January 29, 2022 at Friendship Church of God and Christ, 3402 Dale Street, Fort Myers, FL 33916. For those who were unable to attend the funeral on Saturday but would like to see the service, please us the link below to the recorded version (this link is only good for 30 days): https://viewneral.zoom.us/rec/play/S0XQdVhQ2vTR9VR6wTU0nvc8nxwV9C2HgpfQiyrZhhlOVSy89lUt1ChGzx35cM-syj7yCggaWD6X4DRP.7mQT-HUs3OnCX-cu

Oscar Lee Williams was born on November 21,1950 in Montezuma, GA to the late Elizabeth Lewis Allen and Arkie Williams, Sr. Oscar was educated in the public school system in Macon County, GA in his early years and then moved to New York at the... View Obituary & Service Information

The family of Oscar Lee Williams created this Life Tributes page to make it easy to share your memories.

Send flowers to the Williams family.