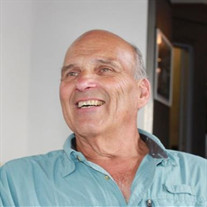 Raymond Donald Santucci, age 80, son of Guido and Ernestine Santucci, was born in Chicago, Illinois on April 22, 1941. He passed unexpectedly on April 19, 2022, while at home on Sanibel Island, Florida. He is survived by his loving wife, Dr. Patricia Santucci, his son, Dr. Raymond Santucci and wife, Dr. Gail Santucci (Sprague), his daughter Gina and husband Scott Usechek, and his loving grandchildren, Max Fontaine, Gabriella Santucci, Charlie Santucci, James Santucci, John “Jack” Usechek and Raymond Usechek. Ray received his undergraduate degree from Loyola in 1963 and his MD from Loyola Stritch School of Medicine in 1967. After internship, he served in the Navy as Lt. Commander and was stationed at DaNang Naval Hospital in Vietnam as a combat surgeon in orthopedics. Upon completing his orthopedic residency, he opened his private practice in the Winfield -Wheaton area of Illinois. He practiced at Central DuPage Hospital where he served as Chief of Orthopedics and President of the Medical Staff. Ray was elected as a fellow to the American Academy of Orthopaedic Surgery. During this time, with a passion for knowledge and giving, Ray also volunteered as Assistant Professor of Orthopedic Surgery at Loyola University Hospital and Shriner’s Crippled Children’s Hospital in Oak Park. In addition, Ray would often join various groups serving at mission hospitals throughout the world. Ray retired from private practice in 1999, transitioned to Florida, and served at the VA Hospital in Fort Myers. Ray responded to his country’s needs after 9/11 and was instrumental in launching a volunteer organization, the Medical Reserve Corps, in both SW Florida and Illinois. He became an instructor with the American Medical Association and continued to educate physicians, first responders, and other healthcare professionals regarding medical responses to terrorism and disasters. Ray’s story is about living a value-driven life. At a young age, Ray’s mother died and he was raised by aunts and uncles. Ray learned about his Italian ancestry and embraced the Catholic Church. He worked hard to achieve his success. From his teens on through medical school, he toiled to make ends meet, working as a plumber, carpenter, a soda jerk, a Chicago City bus driver, and even setting up pins at the bowling alley. Some of our favorite times have been listening to him reminisce and share the funny stories about the driving the graveyard bus shift. Ray graduated from Fenwick High School in Oak Park, where he won a Catholic League Football Championship as an offensive guard. A fitting role for the man we would all come to know as the protector of our family. In 1964, Ray met the love of his life and his best friend, Patricia, a classmate at Loyola Medical School. As Pat struggled to carry her heavy microscope and an armful of books, Ray opportunistically offered to help. Shortly after graduation in 1967, they married and started their internship at Rockford Memorial Hospital in Rockford, Illinois. This June, they would have celebrated 55 wonderful years together. Ray chose to serve his country in the Vietnam War after internship. He didn’t discuss details of the war, but he did describe the challenges of performing surgery under the duress of shelling, and he lamented the lives he couldn’t save. Ray was very proud of his military service, the men and women in uniform, and his country. In 1971, Ray and Pat moved to Wayne, Illinois to practice medicine and start their family. Ray prioritized faith, work ethic and education for his children - and he led by example. Ray worked hard his entire life, preferring to do as much manual labor as Pat would allow. Throughout his life, we would often find him lying on the floor reading his Bible, studying his medical books, or learning about history. On Sundays, Ray could be found at his local Catholic church. Faith played an outsized role in his life and anchored most decisions that he made. Ray’s personality was incredibly dynamic. He was kind, gentle, humble and generous. His compassion for others was genuine and his pleasant disposition was admired by everyone he met. He had quick wit and smile that could light up a room. He was very funny, but his jokes were never at someone else’s expense. He was happiest spending time with his family, making one of his delicious meals and playing with his dogs. Physically, Ray was beautiful. He topped out at 6’1”, had broad shoulders, and big, strong hands. He had brown eyes, perpetually dark olive skin, and a beautifully bald head. Ray was the guy you wanted your daughter to marry and son to be. We are forever grateful to have shared these moments with him. Dad, your guiding hand will be on our shoulders- forever. Mass will be held on Saturday, May 14, 2022 at 11 am at St. Columbkille in Fort Myers, Florida. In lieu of flowers, donations may be made to the Raymond D. Santucci, MD Memorial, Fenwick Catholic High School, https://fenwickfriars.myschoolapp.com/page/giving/donate-now?siteId=1770&ssl=1 or at Fenwick High School 505 Washington Blvd Oak Park, IL, 60302.

Raymond Donald Santucci, age 80, son of Guido and Ernestine Santucci, was born in Chicago, Illinois on April 22, 1941. He passed unexpectedly on April 19, 2022, while at home on Sanibel Island, Florida. He is survived by his loving wife, Dr.... View Obituary & Service Information

The family of Dr. Raymond Donald Santucci created this Life Tributes page to make it easy to share your memories.