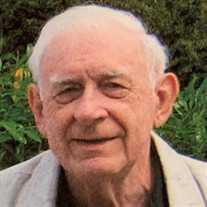 Captain Richard O. Gooden, United States Navy (Retired) passed away on Wednesday, August 4, 2021 at the Shell Point Retirement Community in Fort Myers, Florida at the age of 93. He was born in Conway, Arkansas, in 1928 to Dr. and Mrs. O.T. Gooden and grew up there during the defining years of the Great Depression and WWII. He was a graduate of Hendrix College (Bachelor's Degree) and of George Washington University (Master's Degree) and also was an Eagle Scout. He joined the Naval Reserve in 1947 while he was in college and was called to active duty during the Korean War. He served in the Far East during the war. While a Lieutenant, he was selected for early command and commanded Salvage Tug USS Moctobi. At the conclusion of a six month Western Pacific deployment, Moctobi was cited by Vice Admiral Schoech, Commander, U.S. 7th Fleet, as having received more "Well Done's" than any ship in recent deployments. During the height of the Vietnam War he deployed to Vietnam as Executive Officer of destroyer USS Bigelow. During Operation Sea Dragon Bigelow frequently came under fire from North Vietnamese shore batteries qualifying the ship for the Combat Action Ribbon. While on Bigelow he was selected to command destroyer USS Orleck and, immediately upon completing the Bigelow deployment, he assumed command of Orleck homeported in Yokosuka, Japan. In subsequent years, Captain Gooden was selected for a major command at sea and then commanded USS San Diego, a combat stores ship. Under Gooden, San Diego received the National Defense Transportation Association's outstanding ship award, the overall Battle Efficiency "E" award and all seven individual awards for which the ship was eligible. Finally, Captain Gooden commanded the Military Sealift Command's Atlantic Fleet. Its 35 ships provided underway replenishment of fuel, stores and provisions to the fleet; conducted a wide range of specialized missions; and moved cargo and supplies used by deployed U.S. forces. In 1981he assembled, loaded and deployed to Diego Garcia, an island deep in the Indian Ocean, the first squadron of Marine Corps tanks, artillery and ammunition prepositioned afloat. When he was not at sea his five shore assignments always brought him to the Washington, D.C. area. They included: the Bureau of Naval Personnel (Pers A, Personnel Plans); the Office of the Chief of Naval Operations (Nl, Manpower); the Office of the Joint Chiefs of Staff (JS, Strategic Plans); and The Office of the Secretary of Defense (ISA, International Security Affairs). He also was a graduate of the U.S. Armed Forces Staff College and the U.S. Army War College. His awards include: the Legion of Merit (two awards); the Bronze Star with Combat "V" (two awards); the Navy Commendation Medal with Combat "V" (two awards); the Meritorious Service Medal; the Joint Services Commendation Medal; the Combat Action Ribbon; the Navy Unit Commendation; the Meritorious Unit Commendation; the Navy "E" Ribbon; the Vietnamese Navy Distinguished Service Medal and the Vietnamese Gallantry Cross. After retiring from active duty in 1982, Captain Gooden obtained a Merchant Captain's license from the U.S. Coast Guard and was active in the maritime industry in the New York port area. He was Commandant of Cadets and Master of State University of New York's Maritime College Training Ship and then General Manager of the Staten Island Ferry system. He moved to Florida in 1995 where he enjoyed having his own boat and visits from his children and grandchildren. He is survived by his wife Birthe Chris Gooden; his children, Eugene and Nancy; his grandchildren, Matthew and twins Catherine and Samuel; and, his dog Lucy. A Graveside Funeral Service for Captain Gooden will be celebrated by Pastor Graham Stein at 1:00 PM on Thursday, August 12, 2021 at Sarasota National Cemetery, 9810 State Road 72, Sarasota, Florida 34241, (941) 922-7200. At the conclusion of this ceremony, the Honor Guard for the United States Navy will render full Military Honors following which Captain Gooden will be laid to rest. For those who are unable to personally attend services at the cemetery for Captain Gooden, you are invited to watch the recorded ceremonies by clicking the link below. https://viewneral.zoom.us/rec/play/3nH7KBvnrQORo7t5YbYjO06Zv5dSOvrNp22Ke--AaWGNFHMWGWzAJ5vn0DhEv4h25_oEVxCjd5rxUw2b.X5C-ij-ogAVRmCKy To share a story or photo, leave a tribute or to offer condolences to the family at this difficult time please visit Captain Gooden's memorial webpage at www.fortmyersmemorial.com and sign his guestbook.

Captain Richard O. Gooden, United States Navy (Retired) passed away on Wednesday, August 4, 2021 at the Shell Point Retirement Community in Fort Myers, Florida at the age of 93. He was born in Conway, Arkansas, in 1928 to Dr. and Mrs. O.T.... View Obituary & Service Information

The family of Richard Orville Gooden created this Life Tributes page to make it easy to share your memories.

Send flowers to the Gooden family.