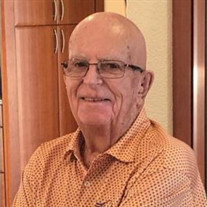 Richard J. Young of Cape Coral, Florida, better known simply as Dick to his family and friends, passed away peacefully with his loving family by his side on Saturday, October 30, 2021 following some recent health challenges. He was 86 years old. Dick was born in 1934 and raised in the Syracuse, NY area. He graduated from Solvay High School and studied liberal arts in college before enlisting in the US Army and achieving the rank of staff sergeant. He met and married Shirley Landon in 1958, and raised their children in a happy home filled with love. They were married until Shirley’s death in 2003. In 2010, Dick married the second love of his life, Patricia Cusic. Together, they made their own sunshine wherever they went. Their most recent adventure, in August 2021, was a cross-country road trip visiting their beloved families in four states. In the early 1960s, Dick began building a career with National Cash Register/NCR Corporation which spanned over three decades. His work was never just a job; he truly loved traveling and meeting people from all walks of life, and in the process assembling the custom technology solutions that would best help his clients serve their constituents. It was his privilege to serve educational institutions and hospitals. After retiring in 1995, he remained very active until shortly before his death. Even prior to his retirement, he began a decades-long avocation as an active volunteer rules official which included both high school and college lacrosse and both amateur and professional golf. His involvement grew to include his role as a Florida State Golf Association tournament chairman, as well as a PGA rules official and event announcer. He was particularly passionate in his encouragement of student and amateur athletes. He will be cherished by his family for his strong life example of approaching each day with character, integrity, curiosity, humility and good humor. He was a source or strength, steadiness and predictability. He inspired in his children a love of travel and the outdoors, and an appreciation of the beauty and diversity of nature. His attitude of service to others is something they still try to live by. He will be treasured by friends and acquaintances for his warmth, friendliness, easy conversation and good cheer towards everyone he met. Dick is survived by his wife Patricia, his children Kimberley Young and Richard Young (Heather), his stepchildren Dan (Londa), Sheila (Dave), Scott (Kim), his grandchildren Hannah, Courtney (Zach), Heather (Ryan), Ashlynn, Kara, Ryan (Jamie), Lily, and Anikka, his nephew Carl (Sil), and many great grandchildren, grand-nieces, and grand-nephews. He was predeceased by his wife Shirley and his two brothers, Gordon and Everett. A Memorial Service for Dick was celebrated by Pastor Graham Stein at 3:00 PM on Thursday, November 4, 2021 inside the Chapel at Fort Myers Memorial Gardens Funeral Home, 1589 Colonial Boulevard, Fort Myers, Florida 33907, (239) 936-0555. For those who were not able to personally attend this service for Dick, the family invites you to watch a recorded version of the ceremony over the internet. To view the service, please click the following link (this link will open for 30 days following the date of the service and will expire on December 4, 2021):- https://viewneral.zoom.us/rec/play/LBc9tnFBbXK2titTJnvNImgk6pLbAaX8Y-ptNl5sd1kbbFC269l73RZ5LYmJ0IQ6Pvi7Qlyx00pSbI41.dtVT_ABJB5VRsn24 In addition to the concluded funeral service in Fort Myers, there will be a celebration of life to be scheduled at a later date. In lieu of flowers, the family recommends that you instead make a contribution in memory of Dick to his favorite charity, First Tee. This program enables kids to build strength of character that empowers them through a lifetime of new challenges by seamlessly integrating the game of golf with life skills curriculum and creating learning experiences that build inner strength, self-confidence, and resilience that kids can carry to everything they do. Donations to First Tee can be mailed to: First Tee, P.O. Box 3055, Ponte Vedra Beach, Florida 32004, or through the internet by using the following link:- https://firsttee.org/donate/ To share a story or photo, leave a tribute or to offer condolences to the family at this difficult time, please visit Dick's memorial webpage at www.fortmyersmemorial.com and sign his guestbook.

Richard J. Young of Cape Coral, Florida, better known simply as Dick to his family and friends, passed away peacefully with his loving family by his side on Saturday, October 30, 2021 following some recent health challenges. He was 86 years... View Obituary & Service Information

The family of Richard J. "Dick" Young created this Life Tributes page to make it easy to share your memories.

Send flowers to the Young family.