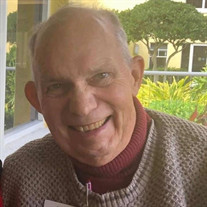 Robert Davis Bradford, Jr. March 17, 1935 – September 23, 2021 Robert Davis Bradford, Jr. (Rob) passed away peacefully on September 23, 2021 after long illness five days after leaving COVID quarantine knowing the love of his family. He has joined the love of his life, Sarah with whom he had pledged in their vows on February 14, 1959 not “til death do we part” but “for all eternity.” Born in New Rochelle, NY to Ethel Mays and Robert Davis Bradford, Sr., Rob spent his childhood in El Paso, TX; Helena, MT; Berkley, CA and Salt Lake City, UT with his parents and sister Suzanne. Rob was frugal and thrifty. Born at the end of the depression and spending his elementary school years pulling his wagon around the neighborhood collecting glass, rubber, and tin to support the war effort, Rob taught his kids not to be fast and loose with resources, to know what’s coming in and what you are doing with it, to know the difference between wants and needs, and to live within your means. With Rob’s ancestors crossing the Atlantic on the Mayflower and the American desert as Mormon pioneers and growing up himself across the American West, Rob has always been the consummate Eagle Scout. “Be Prepared” was more than a motto to him, as you’d know if you ever looked in the trunk of his car. Rob graduated from Cornell University where he studied Chemical Engineering and was an active member of the Delta Chi Fraternity. After graduation, Rob accepted a job with Dow Chemical in Midland, MI where he met and married Sarah Swan and started a family. Family was so important to Rob. Friday night was “Date night” with his wife and weekends were “family time” with many shared picnics and adventures. Rob particularly enjoyed teaching his kids as they “helped” with projects around the house. In 1969, with four children between 18 months and 8 years, Rob led his family on the “Bradford World Tour.” They lived two years in Hong Kong and two years in Melbourne, Australia before settling back in the states in the San Francisco East Bay Area. Being foreigners traveling the world brought the family together and built particularly strong bonds among his children, a gift they always thank their parents for. After five years in California Rob left Dow and his family moved to Weston, CT; he took a job with Olin Corporation in Stamford. Seventeen years later he changed jobs again and he and Sarah moved to New Albany, OH. After Rob retired from Borden and the Chemical Manufacturing Association, he was active in many activities helping many people find community. After several years of snow-birding, Rob and Sarah moved to Fort Myers, Florida near their daughter Robin, son-in-law Tim, and three grandchildren. On family road trips in the wonderful wood-paneled Ford LTD Station wagon Rob would always find a roadside park or rest area for picnic lunch. After lunch, Rob would orchestrate a family “police call” of the rest area, with the family picking up other people’s trash and garbage, just as he would on his long walks. “Leave the world better than you found it” has always been his mantra. And he did just that. Rob is at peace in heaven with his wife of nearly 62 years, Sarah Elizabeth Swan Bradford, who passed from this life to more life in December 2020, and his youngest son William Swan Bradford (Bill) who left this earth just before Rob and Sarah’s 50th wedding anniversary, and with his sister Suzanne Bradford Mason, his parents, and sisters- and brother-in-law. He will be missed by people near and far but especially by his family: children Elizabeth (Jason) Birkby, Robin (Tim) Couch, and Bob (Melanie) Bradford III, and daughter-in-law Monique Salazar; his grandchildren Michael Couch, Sarah Kate Couch, Hannah Couch (Abe) Riddering, Maddie Bradford, Walter Bradford and Will Bradford; great-granddaughters Wyndsor and Elliott Riddering; and many beloved nieces and nephews. Due to Covid-19, there are currently no memorial plans, but we ask that you remember Rob with joy and laughter and say a prayer for his family. In lieu of flowers, we ask that you consider a donation in Rob’s name to the Boy Scouts of America or to a cause of your choice that will help people in need in your local community. Leave the world better than you found it.

The family of Robert Davis Bradford created this Life Tributes page to make it easy to share your memories.