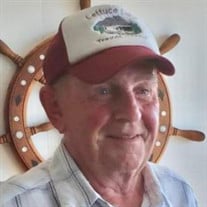 Kind, Vibrant, Fun-Loving Family Man The world became a little less bright with the passing of Robert (Bob) V. Condon of Port Charlotte, FL, and formerly of North Reading, MA, at the age of 82. Bob’s sweet, gentle soul made its peaceful transition home on April 18, 2021. Bob was born in 1939 to David and Florence (Bragdon) Condon, and grew up in Reading, MA. He was the middle child of three boys. He graduated in 1957 from Reading Memorial High School where he met his first wife, Rosemary Sias. He joined the Army Reserves before settling into family life and raising three children, twin sons and a daughter. Bob was a true family man, and he found joy in being a loving husband and a devoted father, as well as attending school functions, sports games and dance recitals, and by just having fun with life. Summer trips to the Condon family camp on Lake Winnipesaukee in New Hampshire were also a highlight, where the horseshoe court was always busy, swimming was never-ending, and rides in Uncle Jack’s wooden boat were a special treat. Winter activities included skiing and tobogganing, as well as the bobsled run that Bob built in the backyard one year. Bob also had a strong work ethic, and took great responsibility in making sure his family was provided for, by sometimes working multiple jobs to make ends meet. In addition to his career with Middlesex Welding Supply for 40+ years, he could be found cutting hair or installing storm windows among his side jobs. Bob was a great storyteller, too, and he always had a good joke or two for every occasion. Music played an important part in Bob’s life as well. His childhood was filled with sing-alongs around the piano – a tradition that he carried on with his own family and friends over the years. He played the banjo for a short while, but his true love was singing, and he could always be found belting out a rousing rendition of My Way by Frank Sinatra at any given time. And, if there was karaoke anywhere to be found, Bob would be the first to sign up! Later in life, while attending a high school reunion, Bob became reacquainted with an old high school friend, Patricia (Raymond) MacMillan. Bob and Pat fell in love and were married a few years later in 1980. Bob’s love of family expanded even further to include Pat’s four children, two sons and two daughters. He brought his bright smile and his kind heart into this next phase of his life. Bob and Pat embraced their new blended family, and their door was always open to whoever needed anything. Numerous family functions were held at their home in North Reading, and the mini-golf course that was built in the yard was a hit to all who visited. As their family continued to grow, they loved spending time with their grandchildren. After retirement, traveling was on the agenda, including yearly trips to Las Vegas. In later years, Bob and Pat became snowbirds, and their time was split between North Reading, MA, Shapleigh, ME and Arcadia, FL. Eventually, they settled full-time into their Florida home, where Bob continued to stay active with golf, horseshoes, cornhole, walking … and, of course, karaoke. His fun-loving, caring ways will be missed by all who knew him. Bob is predeceased by his parents, David and Florence Condon, and his former wife and mother of his children, Rosemary Sias. His loving light and musical spirit will be carried on by his wife of 40 years, Patricia Condon, his sons, Daniel Condon and wife Elizabeth, Douglas Condon and wife Theresa, and his daughter, Sharon Kierstead, his step-sons, Howard and Scott MacMillan, his step-daughters, Lisa DiGiorgio and husband John, and Patricia MacMillan, his brothers, David and Joseph Condon, his eight grandchildren, three step-grandchildren, and seven great-grandchildren, as well as numerous nieces, nephews, other family members and friends, and those lives he touched with his smile and his warm, welcoming nature. No formal services are planned at this time. A family celebration of life will be planned at a later date. Cremation care was provided by Fort Myers Memorial Gardens. Condolences can be shared at www.fortmyersmemorial.com. In memory of Bob’s vibrant life, donations can be made to the Alzheimer’s Association at www.alz.org/donate.

The family of Robert V. Condon created this Life Tributes page to make it easy to share your memories.

The world became a little...

Send flowers to the Condon family.