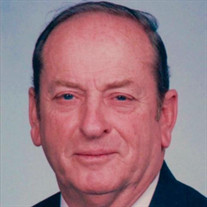 Robert (Bob) Carleton Pelfrey, 88, a devoted family man accepted the gift of eternal life in Jesus Christ and went to be with the Lord on July 3, 2021. He joins his wife of nearly 60 years, Irene Anna (nee’ Young) Pelfrey, who went to be with the Lord in March, 2013. Born January 21, 1933, in Lexington, Kentucky, Bob was one of eight children of Kearney Otho (K.O.), Sr. and Rose Bee (née Cooper) Pelfrey. His early years were growing up on the family farm where he learned hard work and many life skills. He attended in Athens High School in the Lexington, KY area and later graduated from Burlington High School in Boone County, KY. He enjoyed playing basketball throughout High School. As a young man in Kentucky and Michigan, he worked as a farmer, teacher, auto mechanic, bus driver, electrician, and preacher. Bob attended the Great Lakes Bible College in Michigan to complete requirements to minister within the Christian Church. While at the college, he was introduced to Irene and they were married within 8 weeks. Together they raised a family through many challenges and adventures of life. In the early years of their marriage, he preached on Sundays, taught school during the week, drove a school bus, and worked other jobs to make ends meet for their growing family. Later, Bob attended Eastern Michigan University where he earned a Bachelor of Science in Education. After graduation, he moved his family to Ft. Myers, Florida. In 1965, Bob and Irene, along with a few other families, were church planters for Southside Christian Church in South Fort Myers. The Villas Community Center served as their first church home for the congregation. In 1970, they moved to the permanent church home. For 22 years, he primarily taught Math, Science, and English to children in grades 4 - 8. The early years of Bob’s teaching career took place in Kentucky and Michigan. From 1962-1967 he taught at J. Colin English Elementary School in North Fort Myers, FL. At times, he coached basketball, refereed football after school, and took other jobs during the summer. Over the years, he competed for and was awarded four National Science Foundation Educational Grants. He began his Federal Service with a teaching position abroad in 1967 and completed his teaching career after returning to Ft Myers. A few times he taught multiple grades in one classroom and also experienced the unique opportunity to be both the principal and teacher to all three of his children. Bob continued his employment in Federal Service with the USPS starting as a rural carrier and held positions as a regular carrier, special delivery carrier, supervisor delivery and collection, and as a driving instructor. He retired with 27 years of Federal Service. In addition to working his day jobs, Bob was involved in building. As a licensed building contractor, he built several homes for his family and rental properties for himself and his father to supplement income. Overall, he worked more than 50 years in a wide variety of occupations. Bob was a loving husband, father, grandfather and great-grandfather. He most enjoyed visiting with family and friends and the rare large family reunions with all his brothers, sisters, their spouses, nieces, nephews, and cousins. Bob is survived by his children Robert Timothy (Tim) Pelfrey of Fort Myers, Florida, Fred and Krystal (Kris) Pelfrey Apelquist and Todd and Carole Pelfrey both of Oak Hill, Virginia; five grandchildren Bethany Apelquist, Rachel (Jireh) Miaw, Nicholas (Natalie) Apelquist, Jared (Erica) Pelfrey, Joshua (Danielle) Pelfrey; and four adored great-grandchildren Alexia, Daniel, Jonathan, and Rylan and step-grandchildren Jason (Jackie) Apelquist, Kristina Schwab, and two step-great-grandchildren, Chase and Colton. He is also survived by his oldest sister, Nita, younger brother Porter (Judy), and sister-in-law Dee. His siblings Kearney, Jean, Roy, Wayne, and Gerald (Jerry) preceded him in death. A Visitation will be held for Bob from 10:00 – 11:00 am, Saturday, July 10, 2021, at Fort Myers Memorial Gardens Funeral Home, 1589 Colonial Blvd., Fort Myers, FL. A Funeral Service will be celebrated at 11:00 am immediately following the visitation. Interment will follow in the Serenity Garden of Fort Myers Memorial Gardens Funeral Home with the family in attendance. In lieu of flowers memorial contributions may be made to a charity of your choice in loving memory of Robert C. Pelfrey.

Robert (Bob) Carleton Pelfrey, 88, a devoted family man accepted the gift of eternal life in Jesus Christ and went to be with the Lord on July 3, 2021. He joins his wife of nearly 60 years, Irene Anna (nee&#8217; Young) Pelfrey, who went to... View Obituary & Service Information

The family of Robert Carleton Pelfrey created this Life Tributes page to make it easy to share your memories.

Send flowers to the Pelfrey family.