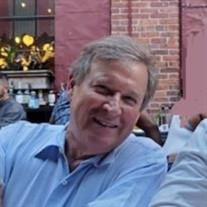 Rodney Roy DeLoach, Jr., 63, a resident of Fort Myers, FL formerly of Virginia passed away Wednesday, September 1, 2021 in Fort Myers, FL. He was born December 30, 1957 in Beaumont, TX. Roy graduated from Taft High School in Hamilton Ohio in 1976 and in 1980 graduated from the University of Houston. DeLoach pursued a law degree and in May of 1986 graduated from South Texas College of Law. Roy DeLoach was a Washington, D.C. based attorney and lobbyist with more than 20 years with legislative and regulatory experience in the financial services sector and related industries. The D.C. Strategies Group was founded in 2010 by Roy DeLoach and Mike Chapman. Chapman is Roy’s longtime trusted business partner and friend. DeLoach had a particularly extensive background in a number of issues related to housing finance, including mortgage origination, loan servicing and secondary market transactions. In addition, DeLoach was an expert on securities and Internet based financial transactions. He was instrumental in gaining an amendment to the Dodd-Frank Wall Street Reform and Consumer Protection Act to limit the potential negative consequences of the law on his client, a trade organization representing a major sector of the U.S. residential mortgage market. More recently, DeLoach played a key role in the passage of the JOBS Act and subsequent regulatory improvements to the statute. DeLoach had strong working relationships with key members of the U.S. Senate Banking and House Financial Services Committees, as well as with officials inside such federal agencies as the Securities and Exchange Commission, Treasury Department, Federal Reserve Board, Bureau of Consumer Financial Protection, Federal Housing Finance Agency and the Department of Housing & Urban Development, among others. He also had deep working relationships with D.C. business groups, including all the major financial services trade associations, the U.S. Chamber of Commerce, and the two housing-related government sponsored enterprises, Fannie Mae and Freddie Mac. DeLoach served as chief executive officer of a major mortgage-related trade group. He also worked as a lobbyist for several national trade groups, including the National Association of Mortgage Brokers, National Association of Realtors and America’s Community Bankers, which is now a part of the American Bankers Association. He was an owner-investor in three dot-com ventures relating to residential loans, mortgage processing and residential property listings, and is considered an expert on new technologies and their impact on the financial markets and related businesses. Earlier in his career, DeLoach worked at several federal agencies, including the Treasury and Labor Departments and the National Credit Union Administration. He was appointed to serve on HUD’s working group on Computerized Loan Origination Systems as well as HUD’s Negotiated Rulemaking Advisory Committee on Mortgage Broker Disclosure. He also was nominated to serve on the FTC’s Advisory Committee on Online Access and Security. DeLoach was one of the most well respected lobbyists in DC. Roy is survived by his six children, Drew DeLoach (Laura) of Baltimore, MD, Connor DeLoach of Fort Myers, FL, Brian DeLoach of Auburn, AL, Reed DeLoach of Charlotte, NC, Caroline DeLoach of Parks City, UT and Sarah DeLoach of Arlington, VA; his parents, Rodney and JoAnn (Teel) DeLoach of Longview, TX; three sisters, Debra DeLoach Beike (Robert) of Cambridge, OH, Pamela DeLoach Sykes Mago (Philip) of Greenbrier, TN and Clara Lisa DeLoach Ross (John) of Longview, TX; one brother, George Lee DeLoach (Laura) of Livingston, TX; his adored companion, Linda Knowlton of Ft. Myers, FL; as well as many extended family members and friends. Roy’s love of boating, scuba trips and scouting trips especially with his kids were Roy’s favorite things to do and talked much about especially over a good cigar. His love of golfing was right up there but golfing did not love him as much! Roy’s sense of humor carried him through the stress of DC and many stories were shared again over a good cigar and bourbon. A viewing will be held 9:00-10:00 AM, Saturday, September 11, 2021 at Fort Myers Memorial Gardens Funeral Home, 1589 Colonial Blvd., Fort Myers, FL 33907. A Mass of Christian Burial will be held 11:00 AM, Saturday, September 11, 2021 at Church of the Resurrection of Our Lord 8121 Cypress Lake Drive Ft Myers, Florida. A reception will be immediately following at Kelly Greens Country Club 12300 Kelly Greens Blvd Ft Myers, Florida. Interment will be in Batson, TX at Guedry Cemetery on September 18, 2021. Reception to follow at the home of William & Caroline Devine's Rocking 7H Ranch. 3384 Hwy 770 North. Hull, Texas

The family of Rodney Roy DeLoach created this Life Tributes page to make it easy to share your memories.